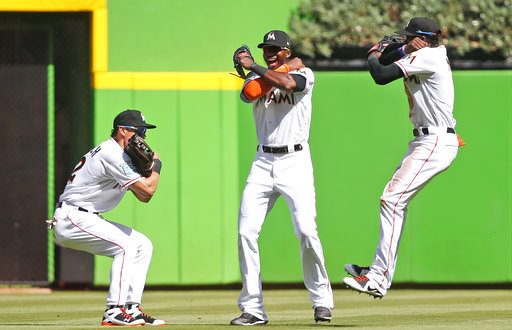 With retooled rosters, fans and media expect the Rays and Marlins to struggle this season while they build for the future. It’s very early, but the Rays have done nothing so far to invalidate those predictions. Tampa Bay was nearly swept by the Red Sox, needing a six-run eighth inning to defeat Boston in the opener. Miami, meanwhile, had a decent showing, splitting four games with the 2016 World Champions.

The Rays and Marlins have struggled in different areas. The Rays held the Red Sox to three or fewer runs in each of the three losses but could not muster more than two runs themselves. The Marlins, meanwhile, averaged 4.5 runs per game, but gave up eight and 10 runs in their two losses.

Tampa Bay wasted strong performances on the mound, including a spectacular MLB debut by 24-year-old righty Yonny Chirinos. Due to injuries, the Rays only have three starting pitchers and employ a bullpen-by-committee approach for the other two games. This was one such ‘bullpen day.’ Righty Jacob Faria started and pitched four innings, surrendering four hits and just one run. Jose Alvarado succeeded Faria and took the loss by giving up the deciding run in his only inning of work. Chirinos then grabbed the ball and went the distance, allowing just one hit and no runs in his four innings while striking out three.

On the other side, Boston’s pitching dominated the Rays’ lineup and featured a noteworthy debut as well. Hector Velazquez started and went 5 2/3 innings, giving up five hits and one run while striking out five to earn the win. Joe Kelly allowed the Rays to put the tying run on third base with two outs in the ninth inning but struck out Denard Span to pick up his first save of the year. In between, former Gator Bobby Poyner made his big-league debut. Red Sox manager Alex Cora brought in Poyner for a lefty-lefty matchup with Kevin Kiermaier to begin the bottom of the eighth. Kiermaier flied out, and Cora took Poyner out of the game.

Boston’s Mookie Betts credits the Red Sox’s pitchers for picking up the slack while the offense struggled.

Tampa Bay’s Brad Miller opened the scoring in the second inning with a solo homerun to right center field off Velazquez. In the fifth inning, Boston responded. Following a Betts single and Rafael Devers walk, J.D. Martinez singled through the left side to score Betts and tie the game. Alvarado entered the game and set down the next three batters to escape further damage. In the sixth, following a single, walk and hit batter, the Red Sox had the bases loaded with one out. Devers singled to right to score one run, but Rays right fielder Carlos Gomez threw out Brock Holt at the plate. Still, it would be all the offense the Red Sox would need.

Brad goes big fly and we’re on the board. #RaysUp pic.twitter.com/RIPn9OYq8p

Offensively, Betts had two hits for Boston, while Matt Duffy and Joey Wendle contributed two hits apiece for the Rays.

Cora is pleased with his team’s balanced and clean performances to start the season.

Dillon Peters pitched a gem for the Marlins, going six innings and permitting six hits and no runs. He pitched to contact, only striking out two Cubs. The approach worked, with the Miami defense committing no errors behind him. Drew Steckenrider, Tayron Guerrero and Kyle Barraclough followed Peters and each worked an inning to complete the shutout.

Offensively, the Marlins roughed up Cubs starter Jose Quintana in the fifth inning. Quintana took a no-hitter into the fifth inning, but Miami struck for five runs on four hits. Chad Wallach and Derek Dietrich each singled in a run. The big blow, however, was Brian Anderson’s three-run double. In the sixth, Yadiel Rivera singled and Wallach doubled to put two runners in scoring position with two outs. A wild pitch allowed Rivera to come home and finalize the 6-0 margin.

Brian Anderson ropes one to right center, bringing 3 runs as the @Marlins take the lead on the Cubs in the fifth! Watch today's game live on FOX Sports Florida! #JuntosMiami #MLB pic.twitter.com/d92u05lRcd

The Rays begin an eight-game road trip in the Bronx Tuesday at 4:00 against the New York Yankees. The first game of the two-game series was scheduled for Monday, but snow forced the postponement to Tuesday. Tampa Bay finishes the road trip against the Red Sox and Chicago White Sox.

Meanwhile, the Marlins host the Red Sox in a two-game interleague series Monday and Tuesday before heading to Philadelphia for three games with the Phillies this weekend.