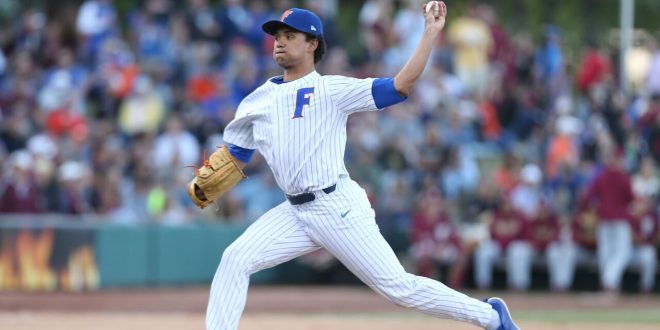 Gator Baseball Battles Back To Beat the Vols in Extras

In what was supposed to be a shortened seven inning game, it took four extra innings for the Gator baseball team to pull off a 6-4 come from behind victory over Tennessee in Knoxville on Sunday.

The Gator bats took a while to wake up in the second game of the series and for a while it seemed like a win just wasn’t in the cards for Florida. Through the first four innings, the Gators stranded five runners on base, including a runner at third in three of those innings.

Things began to change in the top of the fifth when Keenan Bell opened the frame with a lead-off double to center. Nick Horvath followed with a single up the middle, putting runners on the corners. Deacon Liput then drove in the Gators’ first run of the game on a fielder’s choice.

Later in the inning, Jonathan India remained hot and doubled in a run. Earlier in the game, India singled to extend his hitting streak to 18 games — the longest hitting streak by a player under head coach Kevin O’Sullivan.

Heading in to the seventh, it looked like Florida was going to come up short for the first time in nine games. But after Horvath flied to right for the first out of the inning, Liput hit a bloop double to center to provide the Gators with some hope.

Nelson Maldonado then grounded out and, after falling behind in the count, Tennessee pitcher Zach Linginfelter intentionally walked India. With two outs, it all fell on the shoulders of Tennessee native Wil Dalton who had struck out in each of his three previous at-bats.

On an 0-1 count, Dalton drove a double to right, just out of the right fielder’s reach. This brought in two runs and pulled the Gators ahead 4-3, giving them their first lead of the day.

Now the #Gators hold a 4-3 advantage with three outs to go, courtesy of Wil Dalton.

With Michael Byrne taking the mound going into the bottom of the seventh, it was more of a question of how Florida would close out the game rather than if they would.

After surrendering a lead-off single, Byrne was able to get the next two Volunteer batters on a strikeout and foul out. But on the foul out, Tennessee’s Brandon Chinea tagged up and advanced to second. The next Tennessee batter singled to right, scoring Chinea, tying the game up at 4-4. Byrne retired the next batter and the game headed to extra innings.

In the eighth, both teams had runners on base, but neither was able to get anything done.

Jordan Butler took over for Byrne in the ninth. Butler gave up a one-out walk but bounced back to record the second out of the inning. The Vols began to threaten after a single put runners at first and second and an error by India loaded the bases. With the winning run 90 feet away, Butler got Benito Santiago to pop out to short to retire the side.

Both teams again came up empty in the 10th, sending the game to the 11th inning. Butler walked to lead off the inning and the Gators quickly had runners on first and second after India was hit by a pitch. Andrew Baker then laid down a perfect sacrifice bunt to advance the runners to second and third with just one out.

JJ Schwarz delivered a sacrifice fly to right field, scoring Butler, giving Florida a one-run lead. The Gators tacked on another run when Austin Langworthy reached on a throwing error by the shortstop and India came in to score.

Butler opened the bottom of the 11th by hitting a batter but remained solid for the rest of the inning, as he was all throughout his outing. He retired the next three batters to give the Gators the victory and improve his own record to 3-1.  Florida will now play a second game of the day to end the series.

Butler pitches 3.0 scoreless in relief to earn the win. #TheButlerDidIt

Game 2 of our doubleheader coming up in about 45 minutes. pic.twitter.com/itzTo37nsn