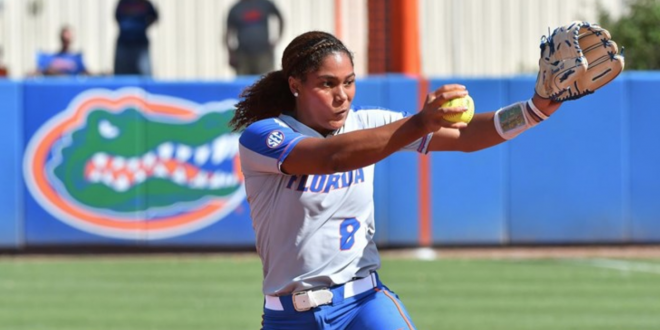 The Alabama softball team evens its three game series with Florida at home with a 3-2 win on Sunday at Rhoads Stadium.

In the bottom of the first, The Crimson Tide (25-10, 6-5 SEC) got on the board.   Sophomore Elissa Brown singled and stole second to advance into scoring position and Kaylee Tow immediately followed with a single up the middle. The freshman’s hit drove in Brown, giving Alabama the 1-0 lead.

T4 | @GatorSo74 really got a hold of that one! Solo HOME RUN over the wall in left field. The game is tied 1-1 with one out. pic.twitter.com/WRPEqQ8aZ5

But Bama battled back. In the same inning, Bailey Hemphill hit her eighth home run of the season. The Tide took the lead once again.

B4th | WAS THAT THUNDER????? Bailey Hemphill with a booming home run over the left field wall to put Alabama on top 2-1!!#RollTide pic.twitter.com/LztjgFjUvH

“It was great to see us respond immediately each time Florida scored a run,” UA Head Coach Patrick Murphy said in a post game interview.

There were two outs with the Gators batting in the fifth inning when Aleshia Ocasio (14-4) hit a pop up to right field, but Alabama outfielder Kaylee Tow lost the ball in the sun. Ocasio got to third and Janell Wheaton‘s double drove home Ocasio, tying the game, 2-2.

After Wheaton’s RBI double, Murphy swapped junior Courtney Gettins with senior Alexis Osorio (9-4) in the circle while Reynoso had a 1-0 count at the plate. Osorio allowed just two hits over 2.1 innings pitched with four strikeouts to earn the win in in relief.

Alabama took the lead one last time, but this time Florida didn’t even the score. In the bottom of the fifth, senior Sydney Booker hit her fourth home run of the season, making it a 3-2 game.

B5th | AN EXCITING NEW CHAPTER ADDED TO THIS GAME!!! Sydney (Book)er with the shot over the left field wall to go up 3-2 in this game!!#RollTide pic.twitter.com/douWsfaNrA

Ocasio (1.15 ERA) threw 90 pitches and 53 of them were strikes. The senior is now tied for fifth all-time in UF history in career triples as well. She registered her third triple of the season and the eighth of her career.

The series finale between the two teams is set for Monday at 7 p.m. on the SEC Network.

Kate Venezio is a fourth-year telecommunication-news student at the University of Florida. Kate does it all: Behind the camera she captures emotional moments as a photographer for the University of Florida Athletic Association. She's comfortable being in front of the camera, too. Kate interviews players, coaches, fans and family members for pre- and post-game coverage as a beat reporter for ESPN Gainesville/WRUF-FM. In addition, Kate produces the sports segment for the weekly WUFT News program. There, she's responsible for writing the script in its entirety to include production commands. The presentation includes video highlights and interviews taped and edited, and Kate then live anchors the final package on a daily deadline. In addition, she writes stories for wruf.com where she informs sports fans of local, state, and national trending topics. Kate also utilizes social media as a tool to help get the stories in front of viewers.
@@kate_venezio
Previous Gators Have Their Way With Volunteers, Win 22-6
Next Gator Baseball Battles Back To Beat the Vols in Extras