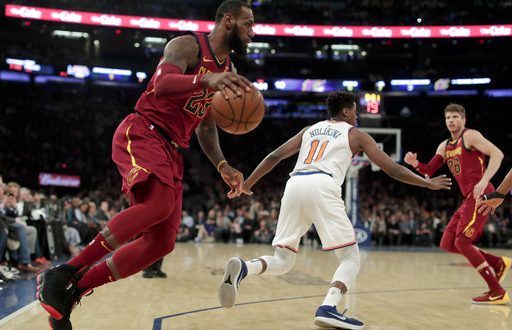 The Cleveland Cavaliers can celebrate their 50th win of the season after defeating the New York Knicks Monday night 123-109.  Along with their 50th win, the Cavs also collect their 7th straight Central Division Title.

This is the fourth time in four seasons the Cavs won 50 games since LeBron James returned from Miami. Furthermore, it’s the 11th time in franchise history. This means James has won 10 straight division titles in Cleveland and Miami.

James finished with 26 points, 11 assists and six rebounds for Monday nights win against the Knicks. Cavaliers Kevin Love scored 28 points, had one assist and five rebounds.

50 wins and a division title may not seem shocking to most Cavs fans. However, there was a always a sense of uncertainty due to injuries, trades and the Cavs head coach, Tyronn Lue, taking a leave of absence during the season.

Coach Lue says James has led the team all year and is the main reason for their success.

The Cavs led only by six with under four minutes to go. But James, like most games, couldn’t be stopped.

In addition, Cavs’ George Hill and Jose Calderon returned for last nights game after being out with injuries. Hill had a sprained left ankle while Calderon had a sore left hamstring.

Happy to be back! Little rusty out there but the leg felt great!
Tonight was special: 50 Wins… https://t.co/hmY0gekUR7

This was the Knicks final home game of the season.

The Cavs and the Knicks go head to head again on Wednesday at 8 p.m. The Knicks beat the Cavaliers the last time they were in Cleveland 114-95.