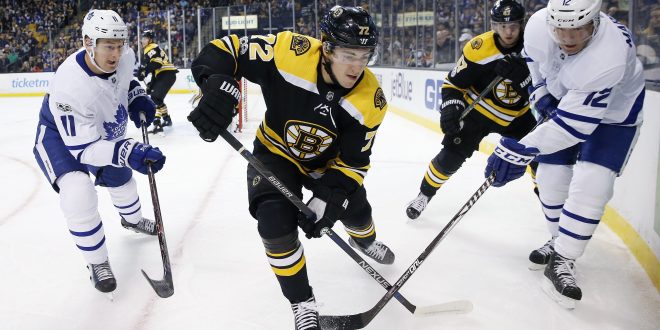 Two teams who qualified for the Stanley Cup Playoffs last year will take the ice in hopes of making it even further this season. The Toronto Maple Leafs will travel to Boston for the first round of the playoffs Thursday night to face the Boston Bruins.

History Between the Two

These two teams have played each other four times this season already. Toronto leads the series with a 3-1-0 record. The last time these two teams played each other in the playoffs was in 2013 and that was an intense win. The Bruins trailed 4-1 in the middle of the third period of Game 7. However, Boston forced an overtime, and they ended up winning. This sent them into the second round of the Stanley Cup Playoffs.

The record is split between these two in the postseason though. Between the Bruins and Maple Leafs, they’ve played in 69 postseason games with a split record at 34-34-1.

The Bruins aren’t coming in too hot as they’ve lost their last regular season game against the Florida Panthers and, therefore, lost the Eastern Conference Title. Boston comes in sixth in the league in scoring with 3.26 goals per game. They’re also ranked fourth in the amount of goals allowed per game at 2.57. Defensively, the Bruins take the cake here. They’re stronger than Toronto in this aspect. For most of the year, Charlie McAvoy and Zdeno Chara have led the defense and have given up the third fewest goals in the NHL this year. Boston has struggled with injuries and have lost top guy Brandon Carlo for the season due to a fractured ankle. However, Chara and McAvoy can still be a huge threat to Toronto if they stay healthy. Boston’s Brad Marchand, Patrice Bergeron and David Pastranak all have scored at least 30 goals this year. If these guys power through, they can really help the offensive effort for the Bruins.

Playoff hockey is back in Toronto and @SnoopDogg has his eye on @AM34's @MapleLeafs. #StanleyCup pic.twitter.com/kYzDYHeuJ9

The Maple Leafs finished their regular season ranked third in the NHL when it comes to scoring. They also have guys who have scored at least 30 goals this year with James van Riemsdyk, Nazem Kadri, and Patrick Marleau right on the bubble with a 27-goal-scoring season. Toronto’s Zach Hyman, William Nylander and Auston Matthews’s speed and skill can really help out the offense.

Boston’s Patrice Bergeron knows of their skills and says, “They’re a tough matchup, they’re a good team. They’ve had good games all the games that we’ve played against them.”

They also have the upper hand as they don’t have as many injuries as the Bruins do.

“Depth is important, whoever’s going to put it together the best is going to come out on top,”  Toronto’s Connor Brown said.

On the defensive side, Ron Hainsey is one of their top guys. Right by him is Nikita Zaitsev and Roman Polak. However, a problem for Toronto here could be the fact that they do give a lot up in the defensive zone. They were ranked as the fourth worst shot suppression team in the league with 33.9 shots on goal per game. This gives them the lowest rate among all of the teams in the playoffs.

When Do They Play?

Boston will host the first two games of the playoffs against Toronto. The first one will be on Thursday with puck drop at 7 p.m.