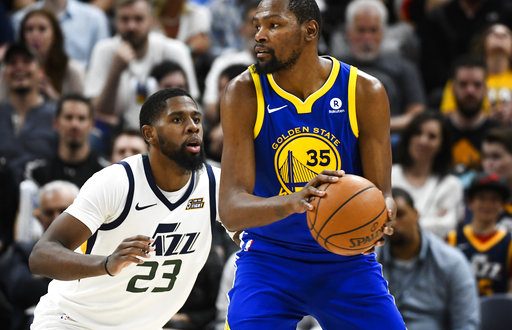 The Golden State Warriors fell to the Utah Jazz 119-79 Tuesday night in one of the final games of the regular season. The Jazz handed a butt-kicking of a game to the Warriors at home in Salt Lake City. With the regular season wrapping up Wednesday night, both teams are looking to begin playoff action this Saturday.

With last nights game, Utah won its sixth straight game in a row and went 3-1 in the series against the Warriors. Utah’s Donovan Mitchell scored 22 points last night and broke an NBA rookie record for threes. He went 4-5 behind the arc and his total number of three-pointers added up to 186 this season, which broke Damian Lillard’s record for first-year players.

Derrick Favors had 16 points and nine rebounds. Jonas Jerebko scored 14 points, and Rudy Gobert and Ricky Rubio both had 13 points each for the Jazz. The Jazz led by 45 points in the second half and they took their largest lead at 103-58 in the fourth quarter.

For Golden State, Klay Thompson added 23 points and Kevin Durante scored 13. The Warriors did not lead once the entire game and only shot 35 percent from the field. Last night’s 40-point loss is head coach Steve Kerr’s largest margin of defeat.

Kerr on how the Jazz played last night and how the Warriors got their “butts kicked”:

Hear how the Warriors are going into the playoffs:

Coming off their 2017 NBA Championship, the Warriors have been the talk of the town. They have clinched six straight NBA playoff births and this year they are trying to get back to the finals for the fourth year in a row. Their record in the last 30 games has been 17-13 with their longest win streak being 7 games at the end of February.

A list of injuries have kept some key players on the bench. Kerr announced Tuesday that Andre Iguodala, who has been out with a knee injury, should be good to go for Game 1 of the first round of the playoffs. Steph Curry also had a promising announcement on his MCL knee sprain injury. Curry has been out for eight games, but he said that he hasn’t experienced any setbacks through his rehab process. He was even seen taking shots before a game this past weekend.

Going into the playoffs, they are 58-24 and are the No. 2 seed in the Western Conference. They will find out who their first round opponent is Wednesday.

Heading into the playoffs, the Jazz still have one more game Wednesday night at Portland. With their win against Golden State last night, they will look to add another win to their now six-game win streak. The Jazz are 48-33 on the season and they’re sitting right behind the Warriors in the No. 3 spot in the Western Conference. Last year was the first season since 2012 that they made the playoffs. They haven’t made more than two rounds of the playoffs since 1998.