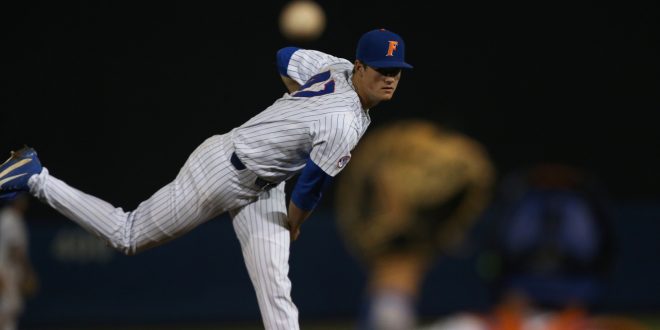 The top ranked Florida baseball team (29-6) has swept the 10th ranked Florida State Seminoles (24-10) for the second straight season. Kevin O’Sullivan and Company picked up their third win of the season over in-state rival FSU Tuesday night by a score of 6-3. With the win at Dick Howser Stadium in Tallahassee, the Gators have now won eight games in a row over the Seminoles.

Florida starter Tommy Mace entered the game with a 6.17 ERA. On Tuesday night, he gave up two runs over four innings of work. The first of those runs was earned in the third when freshman Cooper Swanson led off the Seminoles’ half of the inning with a solo home run, his second of the season.

Every time Florida State scored, Florida immediately had an answer. After the Seminoles got the scoring started in the third, the Gators responded with three runs of their own in the top of the fourth.

Jonathan India got the offensive outburst started with a one-out single. The base hit to left field extended his hitting streak to 20 games.  After stealing second and advancing to third on a throwing error, India scored on a Wil Dalton double down the left field line. Dalton later scored on an Austin Langworthy single to left field.  Over the last six games, Langworthy is hitting .458 with six RBI. Blake Reese capped the inning with a single through the right side that plated Langworthy.

Reese singles to right and Langworthy beats the throw home to make it 3-1.

The Seminoles cut the deficit to one in the bottom of the fifth when a groundout off the bat of junior Mike Salvatore scored sophomore Nick Derr. Bit it didn’t take the Gators long to get the run back.

JJ Schwarz singled home India in the top of the sixth to make the score 4-2. Shortly after, Langworthy picked up his second RBI of the game when he doubled to left center to score Dalton.

Florida State scored for the final time in the bottom of the seventh when junior Jackson Lueck hit a solo home run off of Jack Leftwich, who had taken over for Mace in the fifth. Leftwich pitched 2.2 innings and gave up just the one earned run despite walking three Seminoles and hitting another. He also struck out two.

Schwarz countered yet again for the Gators in the top of the seventh with a solo home run. He now has a team-high 32 RBI this season.

Andrew Baker worked an inning in relief and walked one. Michael Byrne took over with two outs in the eighth and picked up the save, his eighth of the year. He struck out three of the four hitters he faced.

Up next, Florida heads back home to host the Missouri Tigers for a three-game weekend set. The Gators have won each of their first four SEC series.

I'm an above-average golfer with surprisingly great touch around the greens. Click on my twitter link for some sports talk.
@Ry_McGinn
Previous Andrew Luck Confident about His Return
Next Red Sox Throttle Yankees Behind Sale and Betts