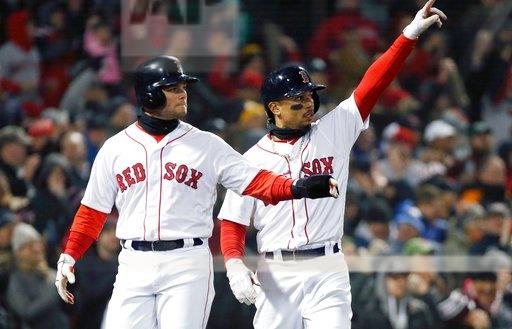 The Boston Red Sox improved their record to an MLB-best 9-1 as they defeated the New York Yankees 14-1. The Red Sox were led by dominant performances from their top two stars, Chris Sale and Mookie Betts. Sale led the Sox on the mound by going 6.0 innings and striking out eight on the evening.

Manager Alex Cora discussed why Chris Sale was able to display such dominance against the Yankees.

Betts had a historic performance, going 4 for 4 with a grand slam and 5 runs.

Mookie Betts made some history at Fenway. pic.twitter.com/XQfQMMe5vb

Luis Severino took the loss for the Yankees after giving up 5 runs, 8 hits and 3 walks in 5.0 innings.

After the game, Severino discussed why he struggled mightily against this potent Boston offense.

Aaron Judge was the lone bright spot for the Bronx Bombers, going 3 for 4 with a home run.

Sox are on Fire

The Red Sox didn’t take long putting runs on the board, producing a 4-0 lead after the first two innings of action. A 9-run 6th inning blew the contest wide open. Boston has now scored 8 or more runs in three straight games. This can be partially accredited to Alex Cora pushing his team to be aggressive at the plate, specifically in the strike zone.

Mookie Betts has been arguably the best hitter in baseball to start the season. He is batting an MLB-best .432 with 2 home runs and 6 RBIs, including 5 multi-hit games in 10 appearances.

After acquiring Giancarlo Stanton in the offseason, the Yankees were expected to be one of the premier teams in baseball. They currently sit at 5-6 and have struggled to find any type of rhythm to start the season.

Stanton has significantly underwhelmed. While he did have two hits against the Red Sox, he has had two 5-strikeout games, which is completely unheard of in the MLB. If the Yankees expect to find their rhythm anytime soon, Stanton needs to start swinging his bat confidently and effectively.

It's been a week to forget for Giancarlo Stanton. pic.twitter.com/2bRhbZAYdC