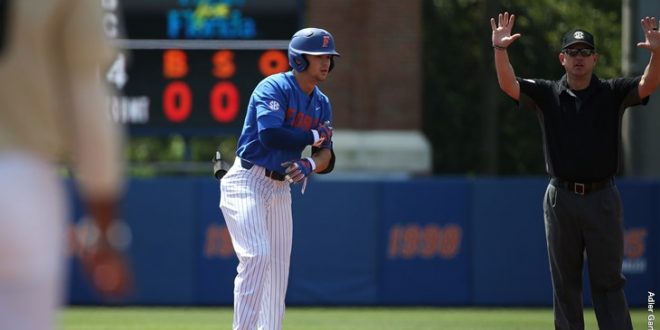 For the second straight SEC series, Wil Dalton came up big for the Gators, helping carry the team to a 3-1 victory over the Missouri Tigers Friday night in Gainesville.

Both the Tigers and the Gators got off to a quick start in the series opener, where there was a crowd of 6, 214 people — the second highest attended game of all time at McKethan Stadium.

Missouri kicked off the scoring in the top of the first when they picked up one run on an RBI ground out. The Tigers had gotten into scoring position after Florida starter Brady Singer walked the first two batters of the game.

The Gators responded in the bottom half of the inning with a run of their own thanks to a Nelson Maldonado home run. This was Florida’s 54th home run of the season, which surpasses the team’s total number of home runs throughout the entire 2017 season (53).

After the first inning, both pitchers were locked in throughout the rest of their outings.

Singer bounced back from his walks to the first two Tigers he faced by retiring 10 straight Missouri batters. A line drive single in the fourth just over the head of Blake Reese at second ended his run.

Due Up: India, Dalton, Schwarz

Freshman Jordan Butler took over on the mound for Singer in the eighth inning. He delivered another strong performance and picked up the win, bringing his record to 4-1.

Gator coach Kevin O’Sullivan says Butler’s outing was one of his best of the season.

The Gators finally broke through and took the lead in the bottom of the eighth. Brady Smith led off with a line drive single to left, followed by a sacrifice bunt by Deacon Liput. After a pitching change, Maldonado grounded out sharply to third, leaving a runner on second with two outs and the red-hot Jonathan India stepping up to the plate. India extended his career-best hitting streak to 21 games earlier in the night on a ground ball single through the left side.

Missouri decided to intentionally walk India to face Dalton, who was 0 for 3 on the night with two strikeouts.

After falling behind in the count 1-2, Dalton drove a double to the wall in left field. Smith scored from second, and India came all the way around from first to pull the Gators ahead 3-1.

Dalton delivers with a two-out, two-run double to put the #Gators on top.

Dalton knows it’s considered a little bit of an insult when the batter in front of him is given a free pass and the opposing team wants to pitch to him. But with India hitting right before him, he says he’s fine with it and expects this to continue happening throughout the season.

This isn’t the first time Dalton came through in the clutch for the Orange and Blue. Last weekend, Florida was down to its last out in Game 1 of the double header against Tennessee when Dalton shot a double off the right field wall to give the Gators the lead late in the game.

Florida’s two-run lead proved to be all they needed after Michael Byrne came in to close the game out in the ninth as he retired three straight Missouri batters on 10 pitches.

Tonight’s win improved the Gators’ overall record to 30-6, making them the second-fastest team in school history to reach 30 wins in a season. The 2016 team was the only one to do it faster after they started out 30-5.  The Gators are 10-3 in the SEC while Mizzou falls to 6-7 in league play.

The Gators will be back in action on Saturday for a double header against Missouri after predicted rain on Sunday has moved the game up a day. The game times for Games 2 and 3 are 4 p.m. and 45 minutes after the conclusion of the first game. Jackson Kowar (7-1, 2.72 ERA) will be taking the mound in the first game of the day, and Tyler Dyson (6-2, 3.48 ERA) will get the call for Game 3. Both games will be broadcast on SEC Network +.