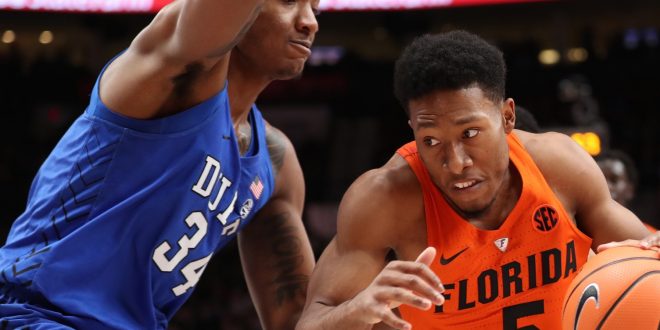 The Duke Blue Devils will have an entirely new starting five next season.

Today, forward Wendell Carter Jr. joined other starting freshman Marvin Bagley III, Gary Trent Jr. and Trevon Duval in forgoing their final three years of eligibility and declared for the NBA draft. Grayson Allen, a senior, was the other member of the starting lineup.

He Has Yet to Hire an Agent But Will Soon

Carter Jr., who averaged 13.5 points and 9.1 last season, has interviewed five agents and will higher one soon. He scored in double figures 30 of his 37 games and had multiple blocks in 21 games. He fouled out in his final game in their elite eight loss to Kansas.

“My emotions are kind of all over the place,” Carter said to ESPN’s The Undefeated. “I’m excited to be chasing something that I wanted to chase my entire life. It was a pretty tough decision. I just wanted to make sure I made the right decision.”

Carter Jr. was one of the players named in the in the Yahoo report from the FBI detailing NCAA violations. He played every game during the season amidst those reports.

His parents had opposite opinions on his decision to leave Duke. His mom hoped he would stay and his father told him to leave. He is expected to be a lottery pick along with center Marven Bagley III.

Carter Jr. is the 16th one and done player in Duke history.

The Blue Devils will rely on freshman again after securing the top three recruits in R.J. Barrett, Cam Reddish, and Zion Williamson.

They also have point guard Tre Jones, the eighth-ranked recruit, giving them four Mcdonalds All-Americans in this recruiting class. Currently, they have the highest ranked class in Rivals.com history. It’s the first time the top three players committed to one school since tracking started in 1998.