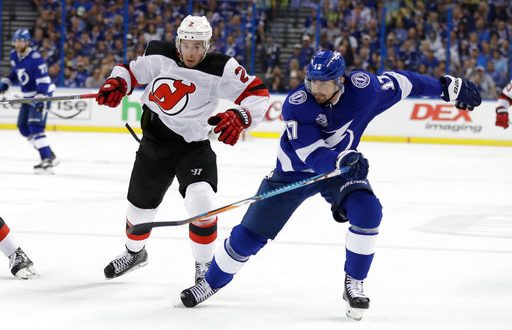 The road to the 2018 Stanley Cup Final is set and the opening round of NHL playoffs kicked off last week. A red-hot Tampa Bay Lightning team was matched up with the New Jersey Devils to start the opening round. The first two games of the series were played in Tampa and the Lightning claimed the early 2-0 series lead. As the best-of-seven series shifts to New Jersey, Tampa Bay hopes to swing the series even further in their favor.

We haven’t seen the New Jersey Devils in the playoffs since 2012. It has also been 15 years since we saw them win their third Stanley Cup in 2003. The Lightning certainly have more playoff experience in recent years. However, their first and only Stanley Cup was won back in 2004. Although we haven’t seen them in awhile, the Devils are no lay-up. Lightning coach, Jon Cooper, knows that making the playoffs isn’t easy for any team.

Both the Lightning and the Devils missed the playoffs last year. They’re both back now and eager to make a run for that elusive Stanley Cup.

The Lightning looked spectacular in the first two games of the playoff series held in Tampa. With over 120 minutes of playoff hockey under their belts in 2018, Tampa Bay hasn’t trailed for one minute. After a 5-2 victory in Game 1, Tampa Bay put up a four-goal lead in Game 2 before ultimately finishing the game 5-3.

The experience of Tampa Bay showed in the opening two games as they handled the changing of momentum much smoother than the less-experienced Devils. This could prove to be an advantage for the Lightning as the series continues but with the two wins also came two injuries for Tampa Bay. Ryan Callahan and Dan Girardi both sustained injuries in Game 2 that forced them out of the game. Callahan will be unavailable for Game 3 and Girardi is set to be a game-time decision. While the Lightning hold the series lead, the injuries may be what New Jersey needs to shift the series in their favor.

The Devils showed promise in the opening games, but there was still much room for improvement. Devils coach, John Hynes, didn’t specify which players would be in or out, but he did say that changes would be made for Game 3.

“There are some guys who just haven’t performed well enough to warrant staying in the lineup… We’re a team, we need to play as a group. We can’t have passengers. We can’t have guys not necessarily playing as hard as they need to in the competitive areas of the game.”

New Jersey, so far, has been clearly outmatched. Although the series is shifting to Newark, Tampa Bay has been the better team and they aren’t going to take the Devils lightly.