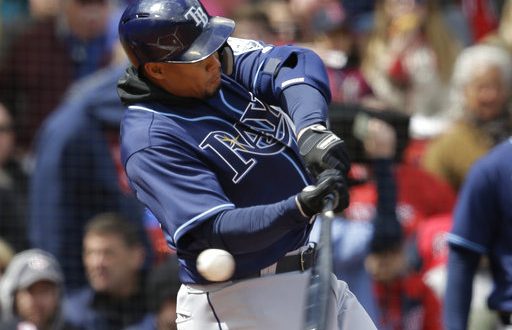 Tampa Bay Rays' Carlos Gomez swings at a pitch during the first inning of a baseball game against the Boston Red Sox, Sunday, April 8, 2018, in Boston. (AP Photo/Steven Senne)

Sitting dead last in their respective divisions, it’s safe to say the Tampa Bay Rays (3-12) and Miami Marlins (4-11) are struggling. Less than three weeks into the 2018 season, it’s already starting to feel like it’s going to be a long year for both teams.

Coming into the season, the expectations for the Rays were pretty low. The team traded several key players, highlighted by the face of the franchise, Evan Longoria, along with All-Star Corey Dickerson, Jake Odorizzi, and Steven Souza Jr. Being such a small market team, the organization opted for lesser-known and minor league players who haven’t established themselves yet.

Still, fans were optimistic for this season. They believed there was no way the team would actually perform as poorly as some anticipated. But unfortunately for them, it seems like they won’t be receiving their miracle season after all.

After winning on opening day, the Rays proceeded to go on an eight-game losing streak. They bounced back to win their next two games to take the series against the Chicago White Sox. However, they fell right back into old habits by losing their next four.

Offense proved to be a problem for Tampa so far, as they’ve been outscored by their opponents 77-48. Out of the qualifying players, Matt Duffy leads the team with a .254 batting average, which is not what a team wants for its leader.

The pitching rotation has also been interesting for the Rays this season. During Spring Training, manager Kevin Cash announced they were going to start with a four-man rotation and just piece together the fifth game with bullpen pitchers. The Rays are currently 0-3 in games where the bullpen pitchers have started.

On top of all of this, the new face of the Rays franchise, Kevin Kiermaier, is expected to be headed to the DL with a right thumb strain.

Kevin Kiermaier left today's game with a right thumb sprain. He is day-to-day and will be re-evaluated tomorrow.

Last in the AL East and already ten games back, it’s evident now more than ever that the Rays need all the help they can get in order to work their way out of their current slump.

Just as it was for the Rays, expectations for the Miami club were not high heading into the season.

Once Derek Jeter took over the team as CEO, he began a fire sale of all of Miami’s stars. Throughout the course of the off-season, the Marlins traded Giancarlo Stanton, Marcell Ozuna, Dee Gordon, and Christian Yelich. This left a shell of the Miami team that finished second in the NL East last season.

Fans were more than displeased by Jeter’s strategy to reduce the team’s payroll by trading pretty much all of its top players. This rebuild is not something Miami fans are interested in showing up to the ballpark to watch. They’ve shown this through their lack of attendance at home games so far this season.

Things became bad real quick for the Marlins this season. On the first pitch of the MLB season, the Chicago Cubs’ Ian Happ blasted a home run off of Miami starter Jose Urena and the Cubs went on to win the game. Since then, Miami has dropped ten of their last fourteen games, including five of their last six.

Not the desired outcome. The Marlins start a new series on Friday against the Pirates. #JuntosMiami | https://t.co/JAWetAXFg9 pic.twitter.com/3jwPiZtisz

The Marlins need to turn it around sooner rather than later if they want to have any shot this season. Currently last in the NL East, they are 8.5 games back from the first-place New York Mets.