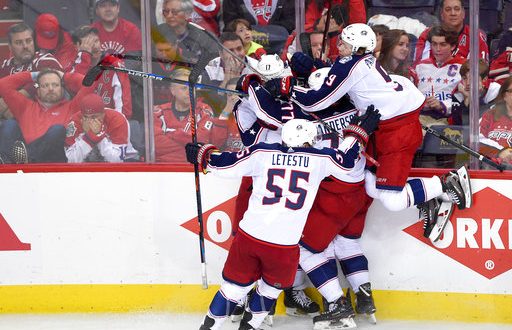 Eight teams took the ice on Sunday for some great playoff hockey.

Penguins Take a 2-1 Lead Over Flyers

In a Pennsylvania rivalry series, the Pittsburgh Penguins won game three in dominant fashion by a score of 5-1. Dominant wins seem to be the theme of the series so far as the first three games have been blowout wins. The Penguins took game one 7-0 and the Flyers won game two 5-1. Pittsburgh star Sidney Crosby had a fantastic outing, scoring one goal and racking up 3 assists. This was Crosby’s 4th goal of the series following his hat trick in game one. In the second period, the Penguins set a Stanley Cup Playoff record for the fastest two goals after scoring two goals in five seconds.

Penguins goalie Matt Murray had a great game three performance as well with 26 saves and only one goal allowed. Sidney Crosby gave a lot of credit to Murray, saying that he “set the tone” for the game.

The wild-card Blue Jackets once again took down the Metropolitan 1-seed Capitals in overtime to take a 2-0 series lead. The first round of the Stanley Cup Playoffs has had three overtime games so far. This series between the Blue Jackets and the Capitals have two of those three. The Blue Jackets used a three-goal second period to take a 4-3 lead after being down 3-1 early in the second period. Washington’s T.J. Oshie scored the game-tying goal in the third period to send it to overtime. Columbus’ Matt Calvert hit the game-winning goal with 7:38 left to play in OT. Calvert’s goal puts the Blue Jackets in position to win their first ever playoff series in franchise history.

Perfect record in the extra frame for the @BlueJacketsNHL. #StanleyCup pic.twitter.com/4Em0XhDj74

After falling into a 2-0 deficit despite being the series favorite, Capital’s star Alexander Ovechkin said that his team “made some bad choices” on the ice.

The Minnesota Wild had a rough two games in Winnipeg, losing the first game 3-2 and the second game by a score of 4-1. With their backs against the wall, the Wild got a much-needed victory over the Jets to cut the series lead to 2-1. Minnesota felt the energy of their home ice and got a 6-2 victory. The Wild got out to a fast start and had a 2-1 lead after the first period. In the second period, Minnesota blew the game wide open. The Wild scored 4 goals in the second period and simply ran away with the win.

Vegas Takes a 3-0 Lead Over LA

The Vegas Golden Knights have become the third team in NHL history to win their first 3 playoff games in their inaugural season. The Golden Knights have taken full control over their first-round series and now have a 3-0 lead over the LA Kings. The Golden Knights have won each game of the series by just one goal. Game one saw them take home a 1-0 victory and game two was a 3-2 victory in double OT. In game three, Vegas scored all three of their goals in the third period to steal a win away from the Kings. Los Angeles coach John Stevens had some comments about the disappointing loss.