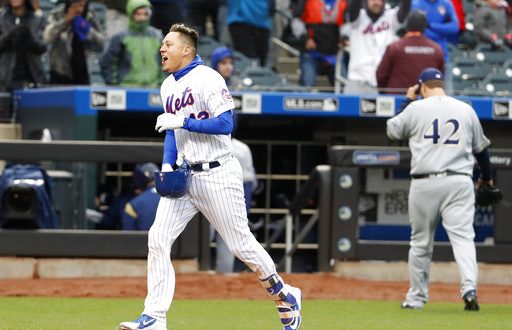 Red Sox, Mets Off To Hot Start This Season

The 2018 MLB Season is less than 20 days in and the layout of the league is already beginning to take shape. Two teams, the Boston Red Sox and the New York Mets, are off to hot starts with two of the best records in Major League Baseball. The Red Sox lead the American League with a 13-2 record, while the Mets’ 12-2 record sits atop the National League.

The Red Sox picked up their 13th win of the season Sunday: a 3-1 victory against the Baltimore Orioles. The win came in 34-degree temperature and steady winds, but the windchill could not cool down the Red Sox. Red Sox outfielder Andrew Benintendi had a strong day at the plate, going 3-for-4 despite the conditions. His RBI triple in the bottom of the 5th scored the first run for the Red Sox and tied the game. Benintendi is happy with the win, regardless of the weather.

Pitcher Chris Sale pitched five innings for the Red Sox, ultimately leaving with a no-decision. Red Sox Manager Alex Cora said that Sale gave them a chance to win, and that was the important thing about his performance.

The Red Sox scored two more runs in the sixth inning to take a 3-1 lead, which they’d hold for the rest of the game. Cora brought in pitcher Craig Kimbrel in the ninth inning to close out the game. Kimbrel would earn his fifth save of the season with just 15 pitches.

The Red Sox own the best record in the MLB and have won each of their first five series. The Red Sox won their division by a slim margin of two games last season, but this year’s team looks poised to break away from the rest of the American League. That is if they can stay red-hot.

While the Red Sox are picking up where they left off last season, the New York Mets are off to a historically good start. The Mets have never started 12-2 and no Mets team has ever won its first five series. Not until this Mets team.

Entering their third game against the Milwaukee Brewers, the Mets were on a one-game losing skid and were in danger of turning it into a two-game losing streak. The Brewers had scored two runs in the top of the sixth inning on a throwing error to take a 2-1 lead. The Mets tied the game up in the bottom of the sixth but failed to score again until the final pitch of the game. Tied 2-2 in the bottom of the ninth inning, Mets infielder Wilmer Flores was at the plate with two outs. Flores was down with a 1-2 count and the situation looked bleak. Then, Flores blasted a home run over the right-field wall to give his team a walk-off victory.

Flores was only 1-for-4 at bat in the game, but the one hit was the only one he’d need. Flores tried to stay calm during his final at-bat, and it ultimately paid off.

The Mets took the series against the Brewers and got back on a winning streak. They sit alone atop the National League standings. The next best teams in the conference, the Pittsburgh Pirates and Arizona Diamondbacks, are each a game behind and have three of their losses in their last 8 games. The Mets did not have a winning record last year, but this new team looks to make last season a distant memory. If the Mets can keep up with their historically great start, then this team has a chance to be one of the best in franchise’s history.

The Boston Red Sox’ final game against the Baltimore Orioles is postponed from its original April 16 date. It will be made up on May 17. The Red Sox travel next to California to take on the Los Angeles Angels on April 17 at 10:07 P.M. EDT.

The New York Mets have a quick turnaround and face the Washington Nationals next. The game is at the Mets’ home turf, Citi Field, on April 16 at 7:10 P.M. EDT.