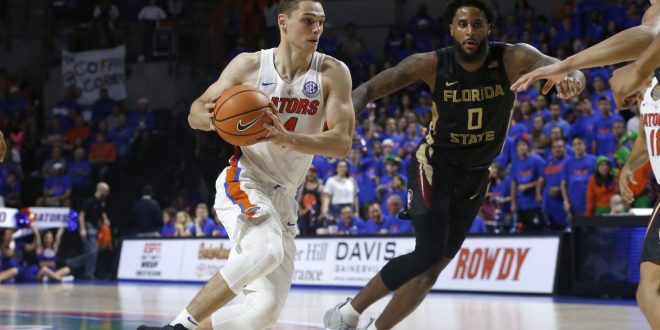 The Future of Egor Koulechov

Known affectionately to Florida fans as “3Gor,” former graduate transfer Egor Koulechov has officially started his path to a professional career. This past week, Koulechov played in the Portsmouth Invitational Tournament in Portsmouth, Virginia. The P.I.T. consists of 8 teams and a total of 64 players. The tournament invites 64 of the top seniors from the NCAA who have exhausted all of their college eligibility. Some of the top names in this year’s tournament included  Marcus Foster (Creighton), Jock Landale (St. Mary’s), Jaylen Barford (Arkansas), Shaq Morris (Wichita State), Chris Chiozza (Florida), Johnathan Williams (Gonzaga), Jaylen Adams (St. Bonaventure) and Yante Maten (Georgia). Koulechov posted 9.7 points, 6.9 rebounds, 1.3 assists and 0.7 steals over the course of 3 P.I.T. games. He averaged 26 minutes per game and shot 34.4% from the field and 29.4% from beyond the arc during the tournament.

Just landed in Gainesville, thanks @PITourney for a great weekend. Enjoyed taking the court with some of the best seniors across the country.

At the P.I.T., there’s a lot to prove for each individual athlete. It’s one of the last chances before the NBA Combine, if they’re even invited, to prove themselves on a big-time stage. Koulechov reflected on this experience on Sportscene with Steve Russell.

The process of a signing an agent can change the course of a player’s career. One option could lead to multiple invites to workout for NBA teams, while the other can leave an athlete’s progression stagnated. Koulechov discussed the experience of sifting through agents on Tuesday afternoon. He has now officially signed with Doug Neustadt of The Doug Neustadt Group.

Throughout the course of the FBI’s investigation on college basketball, a lot has been said about the NCAA allowing schools to pay their players, which is currently illegal. Here is Koulechov’s perspective on the issue.

As Egor Koulechov said on Sportscene with Steve Russell, he didn’t “win the gene lottery.” Because of this, and a late start to his basketball career, Koulechov said he’s always felt he’s had a chip on his shoulder.

With 9 seconds left in the game vs. Texas Tech in the Round of 32 of the 2018 NCAA Tournament, Egor Koulechov came up short on a three-pointer that could’ve potentially sent the tilt into overtime. Koulechov recapped the split-second decision on Sportscene with Steve Russell.

Koulechov is for the NCAA moving back the 3-point line and switching from halves to quarters. He discusses both below.