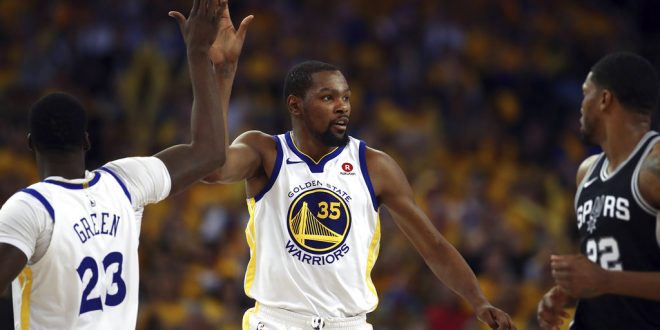 The San Antonio Spurs’ first-half performance was not enough to take down the Golden State Warriors in Game 2 of their playoff series. The Warriors were too much for the Spurs in the second half, and take a 2-0 lead after their 116-101 win Monday night.

Defending home court and taking a 2-0 lead to San Antonio was pivotal for the Warriors in this series. In a tough and gritty Game 2, the Warriors struggled in the first half. Unlike Game 1, they couldn’t find their rhythm and enjoy their upbeat, offensive style of play. The Spurs turned the contest into an aggressive and defensive one. The Warriors went into the half trailing 53-47.

Then in the third quarter, like we’ve seen time and time again, the Warriors made their comeback run. Their overall talent was too much for the Spurs as they entered the fourth quarter with a five-point lead. At the beginning of the fourth, they extended the lead to 11 points, and the Spurs would never find an answer.

Kevin Durant led the Warriors with a rather quiet 32 points, 6 rebounds and 6 assists. Warriors Head Coach Steve Kerr praised Durant’s leadership on the night, and his ability to consistently score for the team.

With Stephen Curry sidelined from a sprained left knee, Klay Thompson stepped up with an impressive Game 2 performance. He finished 31 points and 5 assists, most of which came in the second half. Thompson was hot and could not miss, helping the Warriors make this game look like an easy win.

On the negative side for the Warriors, Draymond Green did come out of the game with a flagrant foul. With 4:31 left in the game, an elbow from Green to Davis Bertans earned Green yet another flagrant foul. After the match, Green claimed that there are bigger things to worry about than a flagrant but hopes it gets rescinded. In the end, though, this could have consequences for the Warriors.

It was a game of two halves for the Spurs who were hoping to even out the series last night. Following the 20-point thrashing of Game 1, Head Coach Gregg Popovich devised a different game plan in order to upset Golden State. Popovich had the Spurs defend aggressively and energetically, trying to break down the Warriors offensive rhythm.

In the first half, the game plan was successful. The Spurs were making the Warriors work hard and earn anything they got. The physicality of the first half was evident through the combined 21 fouls. San Antonio also caused 11 turnovers in the first half from Golden State.

But despite LaMarcus Aldridge’s 34 points, the Spurs’ defensive efforts were not enough to contain the Warriors in the second half. Their gap in talent showed, and the Warriors didn’t miss Stephen Curry nearly as much as the Spurs missed all-star Kawhi Leonard. Aldridge has acknowledged that it’s been tough on both ends of the court without Leonard, but he’s trying to lead the way for the Spurs.

The Spurs have not won on the road in their last ten games, since February 25th when they defeated the Cavaliers in Cleveland. Returning to San Antonio the Spurs will try to use their home court to get themselves back in this series after going down 0-2.

The Golden State Warriors will travel to San Antonio to take on the Spurs in Game 3 and Game 4 of this first-round playoff matchup.

@gabymno
Previous Miami Heat Tie The Series Against the Philadelphia 76ers, 1-1
Next The Future of Egor Koulechov