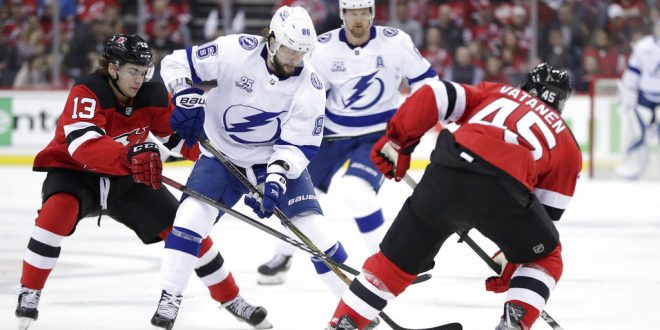 The first two games of the series belonged to the Lightning, but the Devils used the home-ice advantage to get back in it.

After going up 2-0 in the first-round series, the Tampa Bay Lightning dropped a Game 3 loss to the New Jersey Devils on Monday night. Tampa Bay allowed 41 shots and took seven penalties in the 5-2 road defeat.

The Lightning will have the opportunity to take a 3-1 series lead in the Stanley Cup Playoffs first round on Wednesday night.

Going into the first intermission, both teams were scoreless. The Lightning would strike first, though. Under a minute into the second period, forward Alex Killorn set up in front of the net, waited and banked in a pass from forward Nikita Kucherov, who collected the puck in the corner. 1-0 Tampa Bay.

Later in the period, the Devils responded with a goal of their own. Potential MVP candidate and team-leading scorer Taylor Hall took advantage of a chaotic scramble in front of the net and potted his second goal of the playoffs. Hall collected a loose rebound in the high slot and fired a rolling puck past Lightning goaltender Andrei Vasilevskiy.

Former Lightning forward and Devils fan favorite Brian Boyle helped out in the scoring effort to tie the game.

New Jersey wasn’t done yet, but Tampa Bay had an answer first.

Lightning captain Steven Stamkos opened the scoring in the third period with a power-play goal, firing home a cross-ice pass from Kucherov (who has six points in three games). That was Stamkos’ first goal of this year’s playoffs.

Devils Pour It On Late

With the Lightning leading 2-1, the Devils answered back with four-straight goals in the final period. Two of those went into the empty net.

Rookie defenseman Will Butcher started off the barrage by scoring the Devils’ lone goal on the power play (they went 1-for-7). His first playoff goal tied the game and set up New Jersey for its next goal.

More than halfway through the third, Hall carried the puck from his own end into the offensive zone, skating toward the net. He then slid a cross-ice pass over to right winger Stefan Noesen, who rocketed a one-timer from the faceoff circle. 3-2 Devils and the Prudential Center went crazy.

Forward Blake Coleman extended New Jersey’s lead with a short-handed goal as the Lightning were on the power play. Just 20 seconds later, defenseman Ben Lovejoy put the Lightning away for good with another empty net goal. 5-2 Devils.

With the win, the Devils won their first home playoff game since a 2-1 victory in Game 5 of the 2012 Stanley Cup Finals against the Los Angeles Kings.

Devils goaltender Cory Schneider hadn’t won a game in his previous 12 opportunities. He also hadn’t started a playoff game in five years. The 32-year-old netminder accomplished both of those Monday night.

Schneider got the start over teammate Keith Kinkaid, who allowed 10 goals in the first two games of the series. He put on a big performance against the Lightning, turning away 34 of 36 shots and allowing two goals. His final stat line included a .944 save percentage and a timely save against Lightning defenseman Ryan McDonagh about halfway through the third period.

New Jersey head coach John Hynes talked about Schneider’s performance and his ability to bounce back after struggling earlier.

The first round goes onward. Tampa Bay and New Jersey will square off in a pivotal Game 4 on Wednesday night. Puck drop is set for 7:30 on the Golf Channel.

@wclewis_uf
Previous Toronto gets back into series with a win on home ice
Next Rays Win, Marlins Lose in MLB Week 2