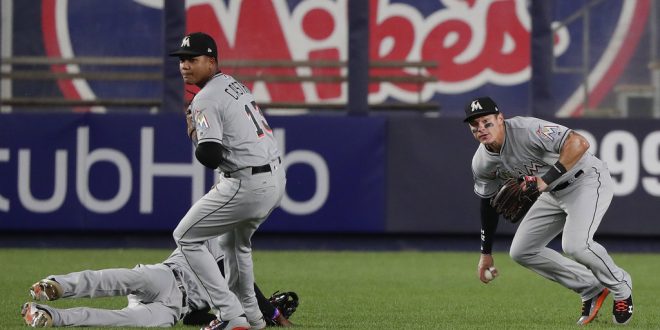 MLB is underway, and both Tampa Bay and Miami have room for improvement sitting at spot No. 23 and No. 30 in the week 2 power rankings.

The Rays(4-12) are off to a good start in their series against the Texas Rangers(6-12) after being swept by the Phillies over the weekend and learning that Kevin Kiermaier will be out for 2-3 months following thumb surgery. Monday’s series opener at home yielded a 8-4 win, with all of Tampa Bay’s runs racked up in the first four innings. Joey Wendle made it home in the first, while Matt Duffy left with right hamstring tightness.

It was a more eventful second inning with four home runs by Rob Refsnyder, Johnny Field on a throwing error, Wendle again and Adeiny Hechavarria. The Rays continued their lead with Mallex Smith scoring in the third inning. The Rangers showed signs of life in the fourth as Joey Gallo homered to center, but were answered C.J. Cron and Daniel Robertson to lock in the Rays’ 8 runs for the night.

The game remained quiet until the eighth inning where Texas caught a second wind and Nomar Mazar homered to right, sending Shin-Soo Choo and  Drew Robinson home. LHP Blake Snell showed his starter-potential, striking out nine, walking none and giving up one earned run on five hits in 6.1 innings.

The Rays hope to improve their series record to two against the Rangers on Tuesday at 7:10.

The Miami Marlins are already hinting at an inconsistent season after taking just one of three games against the Pittsburgh Pirates over the weekend. Monday’s 12-1 defeat by the Yankees(8-7) in New York was their tenth lost in their past 12 games and was reminiscent of their 20-1 blowout against the Phillies on April 7. Caleb Smith was on the mound for Miami while Luis Severino pitched for New York.

The Miami Marlins are 4-12 overall, and will rematch the Yankees on Tuesday at 6:35.