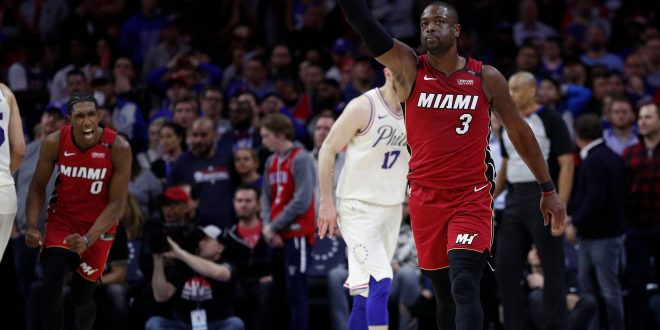 Miami Heat's Dwyane Wade reacts to his basket in the last minute of the second half in Game 2 of a first-round NBA basketball playoff series against the Philadelphia 76ers, Monday, April 16, 2018, in Philadelphia. The Heat won 113-103. (AP Photo/Chris Szagola)

Miami Heat Tie The Series Against the Philadelphia 76ers, 1-1

The Heat were on fire Monday night against the 76ers. They secured the lead early in the second quarter and didn’t let the 76ers catch up. The defense only allowed 13 points from the 76ers in the second quarter. guard Dwyane Wade led the team with 28 points in only 25 minutes in the game. Right behind Wade was point guard Goran Dragic at 20 points.

Head coach Erik Spoelstra enjoys having Wade back in Miami.

Wade had an aggressive approach on Monday on the court, he said.

Additionally, he it a point that to tell his team that they’re family and have to protect each other.

Even though the Miami Heat didn’t seem to struggle against the 76ers this time around, winning isn’t supposed to be easy, Spoelstra said.

However, the Miami Heat’s largest lead against the 76ers was 16 points. The team stats for Miami were 48.78 percent in field goals, 36 percent in three-pointers and 80 percent in free throws.

Other game leaders were James Johnson with seven rebounds and three steals, Kelly Olynyk with six assists, and Josh Richardson with three blocks.

Unfortunately, it was a tough loss for the 76ers, especially due to the end of their franchise-best win streak.

Simmons was the leading scorer for the 76ers with 24 points. He also led in assists with eight and two blocks. Other team leaders were Ersan Ilyasova with 11 rebounds and Dario Saric with four steals.

Brown also expressed frustration on behalf of Joel Embiid, who has been sidelined since the end of March after suffering a broken orbital bone and a concussion.

The Miami Heat and the Philadelphia 76ers will head to Miami on Thursday to play game three. Tipoff is at 7 p.m.

I am a fifth-year journalism major, specializing in sports and media. My favorite sport to watch and cover are college and NFL football. When I'm not doing that, I enjoy hanging out with my cat, going to concerts and traveling.
@sportsabrina
Previous The Colorado Avalanche Grab a Game 3 Win
Next Warriors Comeback vs. Spurs to Take 2-0 Series Lead