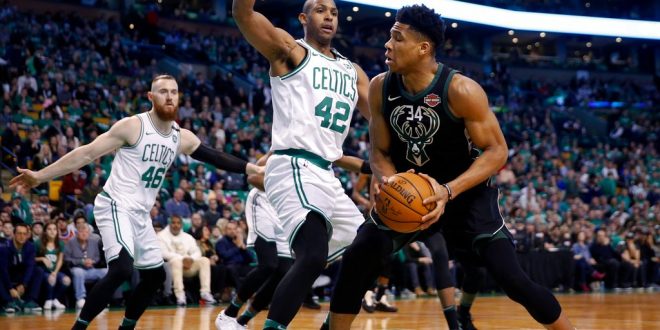 The Raptors look to go 2-0 Tuesday night as they host the Wizards. Toronto’s win on Saturday was the first Game 1 win at home in franchise history.

Game 1 ended in favor of the Raptors with a final score of 114-106. However, the Wizards held a 4-point lead at halftime. Washington’s Bradley Beal and John Wall combined for 42 points. Wall says the team is solely focusing on Game 2.

Toronto’s DeMar DeRozan put up just 17 points throughout the game, shooting just 6-17. Kyle Lowry had 5 turnovers. DeRozan says the team can’t get too comfortable with the 1-0 series lead.

Boston’s defense has been impressive, though their offense has taken a huge hit with the season-ending injuries to Kyrie Irving and Gordon Hayward.

For the Bucks, Jabari Parker’s first playoff appearance seemed to get the best of him. Parker went just 1-5 in 15 minutes of play. Milwaukee needs a high-scoring night from Giannis Antetokounmpo and a stronger performance from Parker to put up more points on the board.

The Pelicans came out on top in Game 1 with a final score of 97-95. Despite a season-ending injury to DeMarcus Cousins in January, New Orleans has still been able to earn a postseason run. New Orleans’ Anthony Davis got his first postseason win out of the way. Davis says the team must continue playing how they have throughout the regular season.

CJ McCollum and Damian Lillard combined to shoot just 13-41 in Game 1 for the Trail Blazers. However, Portland did make a fourth-quarter comeback and brought a 13-point deficit to 1-point with 5 minutes left in the game.

Born and raised at the ballpark! Typically quiet- until it comes to sports. I'm a South Florida native with a passion for baseball nearly as strong as my faith. Grew up in garnet + gold, turned out sporting orange + blue. Likely to be found with a camera. And yes, I take food pictures.
@victoriarossman
Previous The Future of Egor Koulechov
Next Anaheim vs. San Jose NHL Game 3 Recap