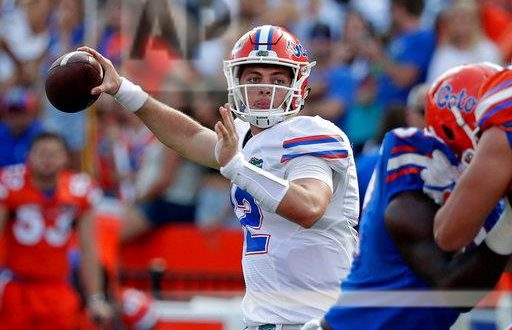 Florida Gator quarterback Jake Allen announced via Twitter on Tuesday that he would be transferring to a different university. Allen is a redshirt freshman and was buried on the depth chart behind Feleipe Franks, Kyle Trask and Emory Jones. Allen will now be forced to sit out a year due to NCAA transfer rules.

According to 247Sports, Allen was a three star prospect and was the 74th ranked player in the state of Florida in the class of 2017.

What This Means for Florida

This does not have much of an impact on Florida’s short or long term plans. Allen was always a depth signing and does not fit the mold of Dan Mullen’s prototypical quarterback. He would not have had much of an opportunity to see the field unless the Gator quarterback chart became decimated with injuries.

Allen had been committed to Florida since his sophomore year of high school, but had numerous quality offers including Miami, NC State, Pittsburgh, Rutgers, Cincinnati, UCF, Wake Forest, FAU and Colorado State.

Wouldn’t be surprised to see Jake Allen end up at FAU or FIU. From South Florida and went to St. Thomas. #Gators #TheFAU #FIU

Allen has always been a high IQ type of quarterback, but some believed he lacked the athletic ability to make a difference playing against SEC-caliber talent. The Gators could look to add a graduate transfer to bolster their depth at quarterback heading into the season.