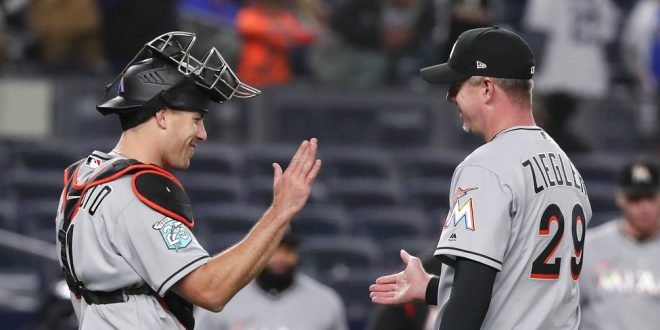 It wasn’t just a normal win for the Miami Marlins last night, but it was a domination of the New York Yankees. The Marlins defeated the Yankees 9-1 at Yankee Stadium on Tuesday night.

What Happened to the Yankees?

The Yankees seemed as though they decided not to show up as the Marlins took the win that was rightfully theirs last night.

At the plate, the Yankees had only four hits producing just one run in the bottom of the ninth.

Giancarlo Stanton went 0-4 at the plate and seems to still be struggling in the Yankee stadium. After the loss on Tuesday night, though, he said the team just needs to keep working.

The Marlins, on the other hand, looked comfortable playing in the thirty-degree temperature in New York last night.

Starting pitcher for the Marlins, Jarlin Garcia, recorded two strikeouts while holding the Yankees to just one hit and zero earned runs over his five innings of work last night.

Seven different players on the Marlins scored last night in Yankee stadium. The offensive spark came from Marlins’ J.T. Realmuto. Realmuto stepped up to the plate in the fifth inning and smacked a three-run homer to put Miami up on New York 7-0. The Marlins would add two more runs in the game to finish the night with a score of 9-1.

This win will be beneficial to the Marlins stats as they entered the game ranked last in the National League in home runs, extra bases hit and worst in the majors in slugging percentage.

The Rangers went up in the first inning and held on to the lead for the rest of the game. Rangers starter Matt Moore received the win last night and pitched seven innings striking out seven and allowing only five hits and no earned runs.

Rays’ right-handed pitcher Yonny Chirinos got the loss last night and did not have an impressive showing at Tropicana Field. Chirinos allowed six earned runs and seven hits in his 5.2 innings of work while striking out three.

From the plate, the Rays continued to struggle. Their first run of the game came in the bottom of the third when C.J. Cron singled to score Daniel Roberston. Tampa Bay would not reach home plate again until the ninth when Wilson Ramos hit a one-run homer to give the Rays their second run of the night. However, this would not be enough as the Rays fell to the Rangers 7-2.

The Rays will take the field again today at 1:10 p.m. for the rubber match of the series.