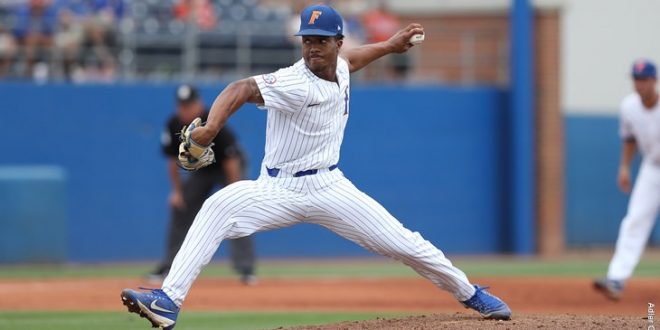 Florida’s last series loss was April 7-9, 2017 against Tennessee in Gainesville. The loss to the Bulldogs also marks the first three-game losing streak for the Gators since being swept at Auburn March 17-19, 2017.

The team Gator fans have become used to seeing this season did not show up in Game 2. Mental and physical errors plagued the Gators beginning to end.

Despite striking out the side, Leftwich hit a batter and balked in the opening frame. This helped the Bulldogs jump out to an early 2-0 lead.

Florida bounced back in the second and tied up the game at two. JJ Schwarz led off the inning with a walk, and Wil Dalton followed with a double. Austin Langworthy brought in the Gators’ first run on a sacrifice fly to left. Blake Reese brought home the next with a double down the left field line.

But the Bulldogs quickly went ahead once again in the bottom of the second after a couple of hits and an error by Brady Smith. On a ground ball to second, Smith dropped the throw from Reese that allowed the runner from second to score. The Gators trailed 4-2 at the end of the frame.

The Bulldogs picked up two more runs and took a 6-2 lead after three innings.

Langworthy provided a little bit of hope for Florida in the fourth with a line drive home run to right, cutting the deficit to three runs.

Austin Langworthy must like Mississippi…he homers for the second night in a row and #Gators put a run on the board!

Gators Had a Chance

The Gators appeared to be in business in the fifth. Nick Horvath walked to lead off the inning and back-to-back errors by the Bulldog infield loaded the bases with only one out. But Schwarz fouled out to second and Horvath was thrown out at home trying to tag up, ending the Florida threat.

Things only became worse for the Gators in the bottom of the inning when Mississippi State broke the game wide open. The frame featured three hits, including a three-run homer, three walks, a hit batter, and a wild pitch, leading to six runs for the Bulldogs.

The fifth inning was also when Schwarz exited the game after taking a foul tip off his throwing hand.  O’Sullivan said after the game Schwarz suffered a bruise to the hand.

Down 12-3, the only bright spot for the Gators was the work of freshman Hunter McMullen who tossed three innings of scoreless relief.

Alone at the Top

Florida may have lost the game and the series, but the Gators still managed to win the SEC outright.

Going into Friday’s matchup, the Gators had already clinched at least a share of the title after taking two of three against Georgia last weekend. With not much to play for, it’s possible this explains Florida’s poor performance against Mississippi State.

With this result, the #Gators won't share the 2018 SEC title with anyone. https://t.co/t85EnVEPnQ

Florida will wrap up the series with Mississippi State, as well as their regular season, on Saturday. Jackson Kowar (9-2, 2.56 ERA) will be on the mound as the Gators will try to avoid the sweep. Game 3 will take place at 4:30 p.m. and be broadcast on ESPNU.

Previous Barnhill, Ocasio Combine for No-Hitter versus Bethune-Cookman In NCAA Regional
Next Gators Lose 13-6 to MSU in Regular Season Finale