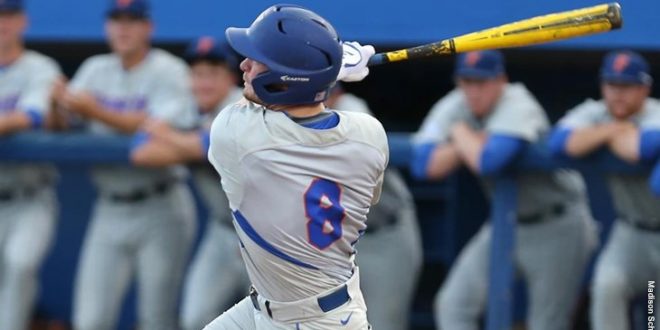 After Mississippi State found a way to score six runs in the eighth inning, Florida found themselves in the “L” column once again, ending the 2018 regular season on a four-game losing streak. The Bulldogs got out to a 4-1 lead to begin the game and never looked back.

Starting pitcher Jackson Kowar was roughed up in his 5.1 innings of work as he gave up six earned runs on nine hits.

How the Gators Dropped the Regular Season Finale

As mentioned previously, MSU came out of the gates hot as they scored four runs in the first inning.

To the Gators credit, they fought back when they could have easily thrown in the towel but the Bulldogs offense proved to be too much. Florida scored two runs in the second inning thanks to a two-run home run by Deacon Liput.

We're just in the second inning and Deacon's got a triple and a homer already! #LiputGood

This two-run shot cuts the deficit to one. #GatorTater

Just as the Gators the cut the deficit to one run, MSU scored two more runs in the third inning. Florida then battled back from down three runs to tie the game at six. Cal Greenfield hit UF’s second two-run homer of the game in the fourth inning and Austin Langworthy scored Liput on an RBI single in the sixth.

The two-run homer cuts the deficit to one in the fourth.

That would be the last run of the 2018 regular season as the Bulldogs scored seven unanswered runs.

Even though UF took the loss, some individuals did end the regular season on a right note.

The biggest performance at the plate came from Deacon Liput who went 2 for 3 with two RBIs and walks. Nelson Maldonado went three for five with one RBI. Austin Langworthy not only had a solid series finale but a great weekend in general. Langworthy went 5 for 10 (.500) over the course of the series.

On to Postseason Play

The Gators ended the season with a 41-15 overall record. It is the second most wins UF has gotten in a season behind only 2016 when they won 46 games.

Florida will try to break out of their four-game losing streak as they begin SEC tournament play. The Gators will take the field as the No.1 seed on Wednesday at 5:30 p.m. against the winner of the winner of the Mississippi State and LSU game. The game will be televised on the SEC Network and a radio broadcast will be available on the Gators IMG Sports Network.

#Gators end the regular season on a sour note, turn the page to the postseason