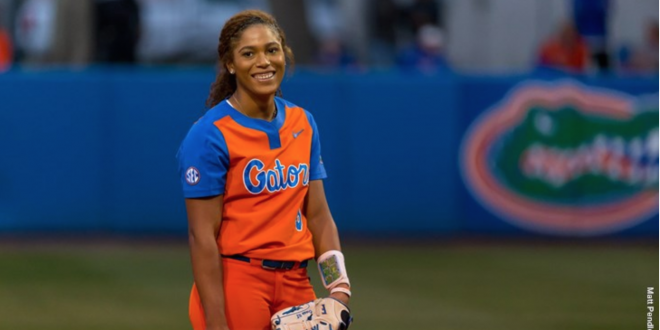 The second-ranked Florida Gators (53-8) advance to the NCAA Super Regionals for the sixth consecutive year after winning the Gainesville Regional. Senior pitcher Aleshia Ocasio led the Gators both offensively and in the circle to a 4-0 victory over Ohio State Sunday night at Katie Seashole Pressly Stadium.

It is the 11th time in program history that the Gators are headed to the Super Regionals.

Ocasio became the first UF pitcher to throw a seven-inning no-hitter in the NCAA tournament. It was her third career solo no-hitter and her second complete-game no-hitter of the season. It consisted of 12 strikeouts and three walks. She said the hard work doesn’t stop today.

Between the no-hitter and spectacular plays made by the Gator defense, the Buckeyes struggled to get on base. In the bottom of the fifth, shortstop Sophia Reynoso fielded a ball that bounced off Ocasio’s glove and sidearmed it to throw OSU’s Taylor Stevens out at first.

SEC Player of the Year Amanda Lorenz attempted to catch a foul ball over left field by jumping into the fence. It looked like it was about to be a home run for the Bucks, but Ocasio came back and struck out the batter.

OSU pitcher Shelby McCombs had a no-hitter of her own working into the sixth inning.   However, she walked 11 and also hit four batters.  Despite the free passes, the Gators struggled to score runs.

In the top of the first, bases were loaded when freshman Hannah Adams was walked to score Kayli Kvistad. The senior’s run gave the Gators the 1-0 lead.

The team earned its second run when Ocasio’s RBI fielders choice to second base brought in Alex Voss. Jordan Matthews followed behind Voss but was tagged out at home.  To start the sixth inning, Jaimie Hoover tripled to right field and Lorenz drove her home on a double to left center. Lorenz is now 11-for-11 on the season with a runner at third and less than two outs. The Gators led 3-0.

Ocasio later hit a sacrifice fly that scored Lorenz from third base.

The Gators will host No. 15 Texas A&M in the Gainesville Super Regionals at Katie Seashole Pressly Stadium beginning Thursday. The team with the best-of-three will then advance to the 2018 Women’s College World Series in Oklahoma City.

Kate Venezio is a fourth-year telecommunication-news student at the University of Florida. Kate does it all: Behind the camera she captures emotional moments as a photographer for the University of Florida Athletic Association. She's comfortable being in front of the camera, too. Kate interviews players, coaches, fans and family members for pre- and post-game coverage as a beat reporter for ESPN Gainesville/WRUF-FM. In addition, Kate produces the sports segment for the weekly WUFT News program. There, she's responsible for writing the script in its entirety to include production commands. The presentation includes video highlights and interviews taped and edited, and Kate then live anchors the final package on a daily deadline. In addition, she writes stories for wruf.com where she informs sports fans of local, state, and national trending topics. Kate also utilizes social media as a tool to help get the stories in front of viewers.
@@kate_venezio
Previous Gators Lose 13-6 to MSU in Regular Season Finale
Next NBA: Golden State Crushes Houston; Take Commanding 2-1 Series Lead In Western Conference Finals