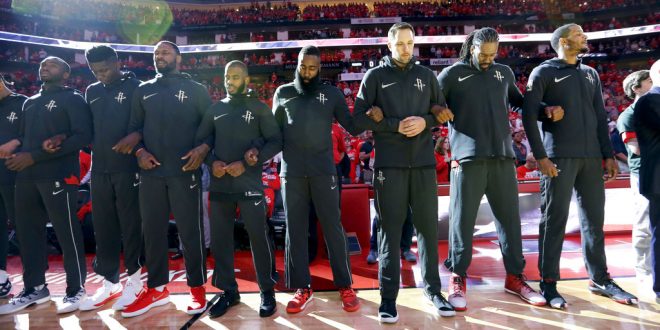 Houston Rockets observe a moment of silence for the victims of last week's shootings at Santa Fe High School, before Game 5 of the team's NBA basketball playoffs Western Conference finals against the Golden State Warriors, Thursday, May 24, 2018, in Houston. Ten people were killed in the shootings. (AP Photo/David J. Phillip)

With the game featuring the shimmy for the ages, the Houston Rockets are now in the lead. Taking Game 5 with a 98-94 victory against the Golden State Warriors, Houston is so close to the NBA Finals.

In memory of the recent victims of Santa Fe High School in Texas, the Rockets were dedicating their game to them. After the game, the celebration would begin with Rockets-colored confetti raining down on the Toyota Center.

With the usual All-Star-worthy performance from Chris Paul, the Warriors now face elimination. Golden State has their backs on the wall for the first time since the infamous 2016 Finals 3-1 lead. Before getting injured, however, Paul would strike back against Stephen Curry with a shimmy, similar to the one Curry performed earlier in the series.

The only negative to last night’s game was an apparent injury to Paul. He was seen clinching his hamstring, which was previously injured this season, but head coach Mike D’Antoni is not worried about his status for Game 6.

Another key for the huge win would come off the bench for Houston, referring to Eric Gordon. Not only would Gordon secure the final turnover to seal the win for Houston, but would also put up 24 points on Thursday night.

His efforts go far beyond Thursday night. Gordon is slowly becoming a huge key for the Rockets, especially with a trip to the NBA Finals just a win away. Regarding his defensive and overall efforts, D’Antoni would sing the praises of the Indiana alumnus.

Houston would also make 13-of-43 three-point attempts in the game last night, with Gordon being responsible for four of those. While the Rockets are relishing in their victory on Thursday, they understand that Game 6 will be a “heavyweight battle” similar to Game 5, according to D’Antoni.

The Warriors are back at home. They host the Houston Rockets in an absolutely monumental Game 6 from the Oracle Arena in Oakland, California. ESPN 98.1 FM – 850 AM WRUF will have coverage of the Western Conference Finals matchup, with Golden State in a “win or go home” game against the Houston Rockets.