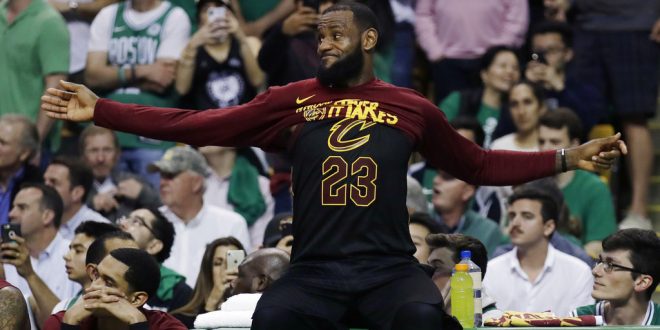 Cleveland Cavaliers forward LeBron James (23) puts his jersey on as he watches from the bench area near the end of Game 5 of the team's NBA basketball Eastern Conference finals against the Boston Celtics, Wednesday, May 23, 2018, in Boston. The Celtics won 96-83. (AP Photo/Charles Krupa)

Cleveland Cavaliers Have Backs Against the Wall in Eastern Conference Finals Game 6 vs. Celtics

The Cleveland Cavaliers are facing the highest pressure situation possible against the Boston Celtics. Amidst rumors of LeBron James’ final home game as a Cavalier, it is a “win or go home” scenario for Cleveland.

Can the Cavs Help LeBron?

There is no doubt that LeBron has been the superstar of this playoff run for Cleveland. With James approaching his 100th game this season, James is running on fumes at this point. Averaging 37 minutes-per-game this season, he is on the ropes.

Leading the team in all statistics, sans rebounds, James has absolutely been unstoppable. The question going into this matchup is “How tired is LeBron James?”.

That is a question that LeBron would address to the media ahead of the massive game on Friday at Cleveland. LeBron believes that everyone, including himself, “has their moments”, but is confident in the team’s health for Game 6.

James has compiled an unreal per-game stat line during the postseason including:

The only other player appearing on the Cavs’ stat sheet is Kevin Love, leading in rebounds-per-game with 10.4. Kevin Love also has the second-most points-per-game in this postseason, with a significant drop of 14.8 when compared to LeBron.

With other superstars, such as Kyle Korver, Tristan Thompson and JR Smith in the fray, they must absolutely step up to help James. These players have had bursts of impact against the Pacers, Raptors and Celtics, but these bursts have been far-too-few and in-between.

These three players have combined for 25 points-per-game throughout the postseason, and will have to provide a lot more than the average six-to-10 points in this matchup if the Cavaliers have any hope of a Game 7 taking place in Boston.

With Game 6 on the horizon, James has a plan in mind, albeit a simple one, to lead the Cavs to force a Game 7.

LeBron is also hoping to use Game 6 as a platform to respond to their abysmal performance in Game 5, where they never had the lead in the game, and took the 96-83 loss on Wednesday.

The plan for Cleveland has to be simple. If they want to keep their Finals hopes alive and get the fourth round of Cavs/Warriors, the plan can be summed up in three simple words: Help LeBron out.

If the @cavs can win at home in Game 6, Kyle Korver knows anything can happen in a Game 7.#WhateverItTakes pic.twitter.com/5FWgFHaxFt

The NBA Eastern Conference Finals’ future will either have a conclusion or a final chapter on Friday. The Cleveland Cavaliers will play host to the Boston Celtics at 8:30 p.m. Cleveland will look to even the series at three games apiece. Finally, for continuing coverage on the NBA Playoffs, stick with ESPN 98.1 FM – 850 AM WRUF as the NBA Finals approach.