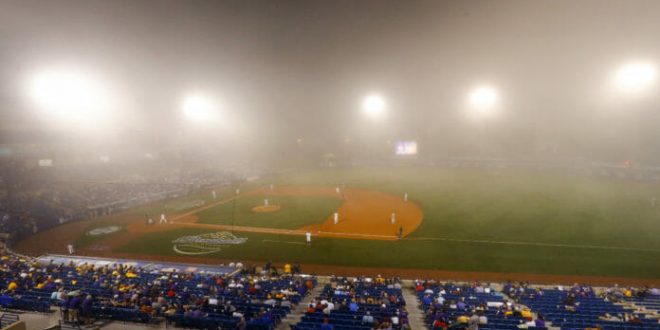 Gator Baseball Lost In A Fog, Eliminated From SEC Tournament

The Gators played in a fog in more ways than one Friday night, but it wasn’t until Saturday morning when their SEC Tournament Championship hopes came to an end.

A fog delay in the bottom of the sixth inning on Friday forced the umpires to suspend the game until the following morning. After resuming, only four outs were needed for the LSU Tigers to run-rule Florida 11-0.

Freshman Jack Leftwich started on the mound, and despite giving up just two hits through five innings, the Gators found themselves trailing 3-0 heading into the sixth.

Hunter McMullen took over for Florida at that point and got off to a good start, striking out the first batter. But that was the last thing to go right for the Gators.

After a single, balk, two errors, a walk, two wild pitches, and a passed ball, the Tigers pushed across three more runs and chased McMullen out of the game.

Still, with just one out, Andrew Baker came in to pitch, and the struggles continued for the Gators. Baker gave up a single and a hit by pitch to the first two batters he faced.

Florida finally picked up the second out of the inning, but LSU’s Antoine Duplantis followed with a 2-run single that brought the score to 8-0.

By this time, the fog had been rolling in for a while and became dense, causing visibility to be very low. After another walk to load the bases, LSU’s Daniel Cabrera hit a pop-up to shallow left field that no one saw off the bat. The ball fell in, and two more runs came around to score, putting a possible 10-run rule into effect.

With the visibility being so low, the umpires stopped the game, as they were worried about player safety. The game was eventually suspended, and play was set to resume to next morning.

Here's SEC commish Greg Sankey on why the game was suspended tonight. pic.twitter.com/3a5g5YtnBc

Ten hours and 31 minutes later, Florida was looking for a fresh start after the disastrous way their night ended.

Coming back to the stadium Saturday morning, the Gators’ goal was to wipe the slate clean from the day before and come out and play the way they know they are capable of playing. But the morning was just more of the same from the night before.

LSU still had runners on second and third, and the first batter of the day singled to third, extending the Tigers’ lead to 11-0.

The inning finally came to a close on a strikeout by Kirby McMullen.

Heading to the top of the seventh, the Gators faced elimination by way of the 10-run rule if they didn’t score at least two runs.

Deacon Liput led off with a single up the middle, but LSU pitcher Nolan Fontenot was able to strike out the side as the Gators went down in order, ending the game in seven innings.

Now eliminated from the SEC Tournament, Florida will travel home to Gainesville and await the beginning of the NCAA Regional Tournament on June 1. The Gators will host a regional, but it’s not yet known who they’ll have to face. The full bracket will be released Monday at noon on ESPNU.