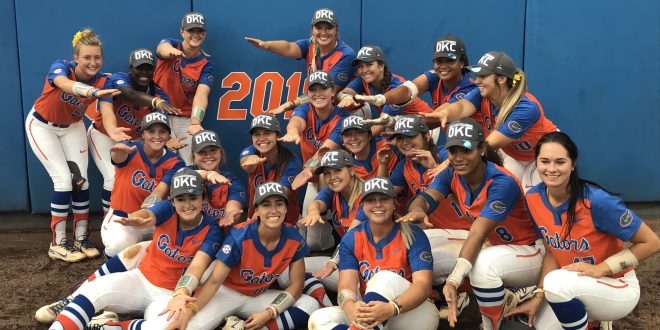 The Gators pose for a team photo in front of the new 2018 Women's College World Series sign in center field.

The No. 2 Gator softball team is heading to the Women’s College World Series (WCWS) after winning 5-3 against No. 15 Texas A&M on Saturday evening. Freshman Jordan Matthews won the game when she drilled a three-run home run over the scoreboard in the bottom of the seventh inning.  Florida advanced to its second consecutive WCWS and its sixth in seven years in the team’s 11th come from behind victory this season.

Florida entered the sixth inning with a 2-0 lead generated by RBI singles from Hannah Adams and Janell Wheaton in the fourth and fifth inning. Aleshia Ocasio (22-7) relieved starter Kelly Barnhill in the top of the sixth inning with the bases loaded and no outs. Ocasio struck out Kaitlyn Alderink and Riley Sartain swinging but Tori Vidales scored on a wild pitch. The crowd froze silently when Kristen Cuyos hit a fly ball to left field, but cheers resulted as Amanda Lorenz caught the ball close to the warning track.

With the series on the line, Gator coach Head Coach Tim Walton allowed Ocasio to return to the circle rather than bringing Barnhill back in for the final three outs. Ocasio struck out the first two batters but struggled against the top of the lineup like in yesterday’s game. Sarah Hudek singled to right field and Tori Vidales sent a home run past the center field wall to give the Aggies a 3-2 lead.

The Gator patience at the plate paid off in the final half-inning, with Trinity Harrington walking Lorenz and Kayli Kvistad. With two outs and a full count, Jordan Matthews foul-tipped multiple pitches before hitting the walk-off home run. Walton acknowledged that it was his mistake to leave Ocasio in the game, but wanted Matthews and the team’s toughness to be recognized in the vital game. Walton described Matthews’ home run as a “holy **** moment.”

@_TimWalton highlighted that “toughness is on the wall for a reason” when describing @GatorsSB work ethic and determination to make the Women’s College World Series. pic.twitter.com/s0oYQZENlE

The Florida Gators will participate in the WCWS from May 31 to June 5/6. The WCWS starts with double elimination in bracket play and ends with a best of three championship series. The Gators made it to the championship series last season but were swept by the Oklahoma Sooners.