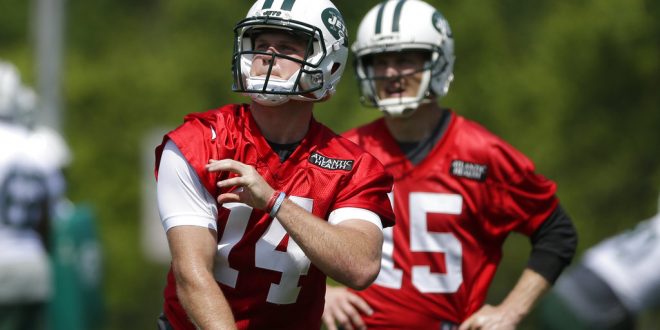 You’d have to excuse the New York Jets’ faithful if they seem desperate for a quarterback: Their team arguably hasn’t had a long-term solution for the position since Chad Pennington.

When the franchise traded up to nab USC star Sam Darnold third overall in this year’s draft, hopes soared. After ten years and nine different starters, the 6-foot-3 gunslinger represented the dawn of a new era.

Reporters got a glimpse of it when Darnold unexpectedly took eight reps with the first-team offense during Tuesday’s OTAs.

For the time being, a glimpse is all it was. Head coach Todd Bowles has downplayed the quarterback’s promotion, noting the reps were standard team procedure.

“(We’re) always throwing rookies in … with the starters,” he said. “As the reps get up there, you put teams in with Josh (McCown) and Teddy (Bridgewater) … and Sam took some today. There’s nothing to read into.”

However, with how he’s been progressing, the rookie could soon solidify his place at the top of the depth chart.

After a rough debut in front of the media last week, Darnold turned in a solid showing on Tuesday.

According to the New York Post, the rookie from Capistrano Beach, Calif., took 20 reps on offense, six more than  McCown and Bridgewater. His lone interception on the day came during seven-on-seven drills, but did little to tarnish an otherwise strong outing. Darnold finished team drills with eight completions on ten attempts, including a pretty pitch-and-catch with wideout Robby Anderson down the sideline.

The Post’s Brian Costello noticed Darnold’s poise, mentioning how it improved from his first public outing. Some of his teammates also chimed in, with fellow quarterback Bridgewater praising the rookie’s work ethic.

“I can tell you that this guy comes to work everyday. He has his hard hat on and he’s focused,” the former Viking starter said.

“He’s sitting in those meetings and he’s taking notes, and he seems like a guy who’s ready to do some great things in this league.”