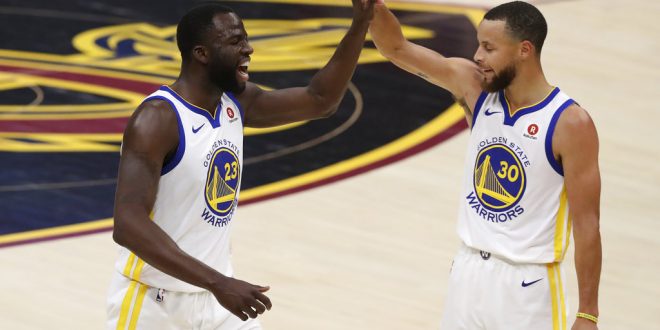 The NBA Championship is well within reach for the Golden State Warriors. After a near-legendary performance from Kevin Durant, they defeated the Cleveland Cavaliers 110-102 in Game 3.

A Game of Cat-and-Mouse in the First Half

Game 3 of the 2018 NBA Finals will be remembered as a legacy game for Durant. Compiling a stat line of 43 points, 13 rebounds and seven assists, he was something straight out of a Terminator movie.

The first points of the game came from Kevin Love to put the Cavs up 3-0 in the opening seconds of the game. After Draymond Green would sink two free throws at the line, J.R. Smith would answer with a three pointer of his own. Javale McGee would put the Warriors back in striking distance, before a Tristan Thompson would hit a layup, thanks to a LeBron James assist.

Three minutes into play, James would have, arguably, a No. 1 on the #SCTop10-worthy dunk.

The Cavs would have 12 points unanswered before Durant would hit a 10-footer at the 7:19 mark of the first. The end of the first would come, with the score at 29-28 Cleveland. James would hit the first points of the second, followed by Rodney Hood with a basket of his own.

Game 3 of the NBA Finals would appear to be Cleveland’s to win, leading by 12 at the 5:47 mark of the second. With the half winding down, Durant would hit another triple, bringing the halftime score to 58-52, Cleveland.

The third quarter would start, and the Warriors would put their foot on the gas. Kevin Love is all too familiar with the third-quarter shift, calling their Achilles heel in this series.

Durant would help the Warriors take the first lead of the game with a two -pointer, bringing the score to 67-64. Klay Thompson, Stephen Curry and Durant would extend the team’s lead to 69-64. James and George Hill would tie the game up at 69-69, before another Durant three-pointer. Following a back-and-forth quarter, the score was 83-81 Golden State heading into the fourth.

A very close fourth quarter would cap off this game, and featured six lead changes. As the quarter was winding down, a little bit of déjà-vu would strike by way of a Durant three-point dagger to seal the game.

Following Curry’s trip to the line, the game would end, with the Warriors prevailing and taking a 3-0 lead. Curry believes a big part of the win was the “supreme confidence” of Durant in this battle.

Many were impressed with how similar Durant’s triple was to last year’s, including Draymond Green. He would comment on the game-sealing moment for Golden State, and praise the setup and shot.

Can Cleveland Come Back?

History isn't on the Cavs' side. pic.twitter.com/iho67juZc1

The Cavs are now in an unfavorable position. Down 0-3 to Golden State, no team in NBA history has ever come back to win four in a row. Game 4 will take place on Friday at the Quicken Loans Arena in Cleveland, Ohio. Tipoff for that takes place at 9 p.m. Finally, stay with ESPN 98.1 FM – 850 AM WRUF for live coverage of that matchup beginning at 8 p.m.