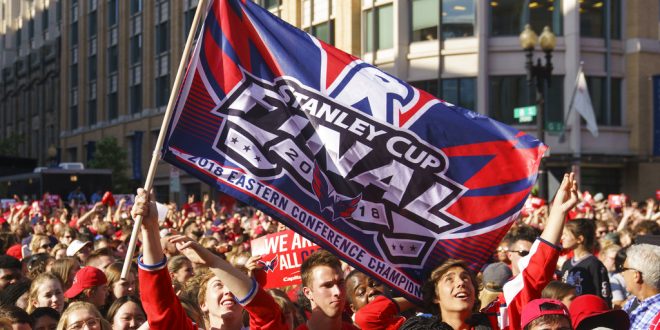 The Washington Capitals are one win away from claiming their first NHL Stanley Cup title in franchise history tonight in Las Vegas. The Vegas Golden Knights are looking to keep their hopes alive in a win-or-go-home scenario.

After the 6-2 victory in Game 4, the Caps took a 3-1 series lead. After dropping Game 1 in Vegas, Washington has responded by winning three straight.

One more win. That's all that stands between the Washington Capitals and the first #StanleyCup championship in franchise history.

Braden Holtby has been strong between the pipes since allowing six goals in Game 1. He has not allowed more than two in the three games since Game 1. The Washington goaltender saved the puck 28 times in Game 4 in Washington.

Overall in the postseason, he is allowing 2.13 goals-per-game, and has a save percentage of .923.

The Capitals are getting production from all lines in the cup finals. In Game 4, six different Washington players put pucks in the back of the net.

Alex Ovechkin leads the Capitals in scoring through the playoffs, scoring 14 goals while distributing 12 assists.

Knights Look to Bounce Back

After taking Game 1, Vegas has been slow to respond to the offensive output the Capitals have produced. The Knights have scored a combined five goals in the last three games of the series.

However, Vegas has been strong at home this postseason. Despite a Game 2 loss, the Knights are 7-2 at T-Mobile Arena, and will need a victory to stay alive.

Washington, though, has been just as strong on the road. The Capitals are posting a 9-3 record away from the nation’s capital of Washington.

A strong performance from Marc Andre Fleury will be needed for Vegas as he has allowed at least three goals in this Stanley Cup series.

Before dropping the last three games of the series, the expansion darlings of the NHL had only lost three playoff games total. In their three previous series, the team won to reach the finals in their inaugural season.

Taking it ONE GAME at a time pic.twitter.com/HjHnUQa76t

With the Vegas Golden Knights facing a win-or-go-home situation, Game 5 is monumental. The game will take place from the T-Mobile Arena in Las Vegas, Nevada. Finally, stay with ESPN 98.1 FM – 850 AM WRUF, as live coverage of the Stanley Cup Finals will begin at 8 p.m.

The Panthers went to Tampa Bay yesterday with a vengeance, more than likely to seek …