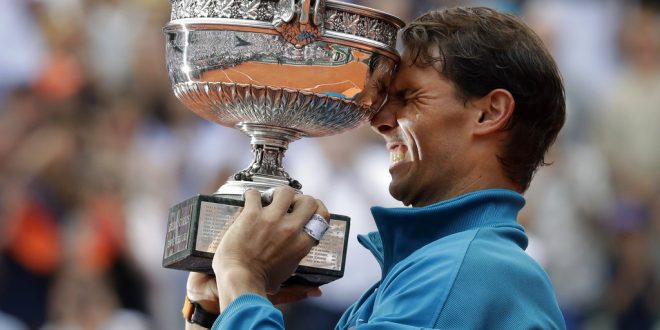 The 2018 French Open concluded last weekend, with a veteran extending his record of wins in the tournament, and a newcomer winning her first Grand Slam of her career.

Nadal continued his unparalleled success at Stade Roland Garros by winning his 11th French Open title, extending his all-time record in the competition by five wins. Overall, the 32 year old now has 17 Grand Slam titles, trailing Federer by three for the all-time record.

Nadal, the No. 1-seed, faced Dominic Thiem, the No. 7-seed, in the final. Thiem was tested early in the competition, as he faced No. 2-seed Alexander Zverez in the quarterfinals. However, he took down the German in three straight sets.

The Spaniard showed why he was the favorite heading into the tournament, as he took down Thiem in straight sets, 6-4, 6-3, 6-2. After the match, Nadal was emotional as he took in the atmosphere from the crowd.

On the women’s side of things, the No. 1-seed also won. However, it was the first Grand Slam win of her career.

Romanian Simona Halep, 26, was tested in the semifinals, as she faced No. 3-seed Garbine Muguruza. However, she defeated Muguruza in two sets to face the American Sloane Stephens in the final.

The 25-year-old American took the first set 6-3; however, Halep didn’t let that deter her. She came back to win the next two sets 6-4, 6-1 to secure her first Grand Slam title of her career.

Halep dreamed of winning the French Open since she began to play tennis. Of all of the Grand Slam tournaments, Halep longed for a French Open victory the most.

According to Reuters, Nadal is unsure if he will be physically fit enough to participate at Wimbledon. Nadal cites coming back from an injury to a long and demanding clay court season for his potential absence from the competition.

Halep, however, is eager to continue her success in another major as she looks to cement her place as the world’s No. 1 women’s tennis player.

Action from Wimbledon will begin on July 2.

Tennis stars Novak Djokovic and Ashleigh Barty have reached the top of the mountain. Djokovic …