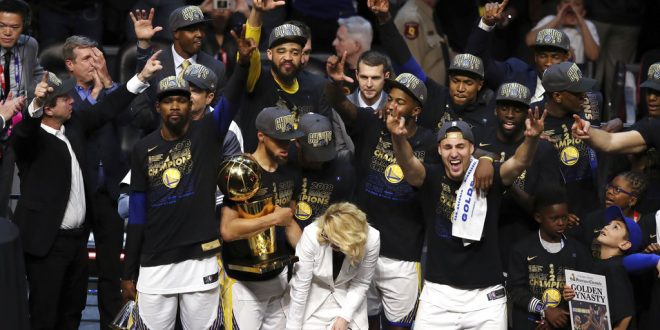 For the second year in a row, the dynasty adds on to their resume. The Golden State Warriors are once again the reigning NBA Champions of the world.

This season for the Warriors will forever show just how much of a grip this team had on the league in 2017-2018. Despite this team not being the top favorite at the start of the season, they would turn that perspective around. Adding Nick Young and Zaza Pachulia, the team’s offseason also saw Stephen Curry getting paid.

The Warriors would sign Curry to a five-year deal, while signing Andre Iguodala and Shaun Livingston to three year deals. The team would amass a 56-24 record, and fir the first time in a while, not be the top team in the West. They fell behind the Houston Rockets, who were 65-17 in the regular season.

Durant is not only celebrating a second championship, but a second season with Golden State. His signing sent shockwaves throughout the NBA world in 2016, and Durant would finally respond to the negative responses regarding his signing.

Golden State would do something that had not been done since the 2007 NBA Finals: sweep LeBron James. The Warriors now join the San Antonio Spurs as the only team to sweep James in an NBA Final series.

Can Anyone Stop the Dynasty?

With the Warriors seemingly taking a stranglehold on the NBA, this free agency will be a very interesting one. Arguably, this will be The Summer of LeBron James. For the first time in four years, questions are surrounding his status for next season. After losing four straight games to Golden State, the question becomes “Where does LeBron go?”

Another Summer of LeBron begins. pic.twitter.com/oNrqPFlVjW

His time in Cleveland saw its moments, winning the championship against the Warriors in 2016.

While LeBron’s destination is unknown for the 2018-2019 season, the West is certainly looking to get a crack at the champions. Two teams that are constantly in the discussion are the Rockets and the Oklahoma City Thunder.

The big story for OKC is the impending free agency of Paul George. Averaging 21.9 points per game, 3.3 assists per game and 5.7 rebounds per game, he could become a viable piece for any team looking to dethrone the champs. Questions are being raised around his status, while all eyes in OKC also focusing on the current MVP of the NBA, Russell Westbrook.

The duo is making an appearance on the All-NBA Team, and look to remain as teammates next season, with the hopes of dethroning the champs. Oklahoma City, however, are not the only team looking to reign atop the West and the NBA.

Houston is simply using revenge to motivate themselves. After taking Golden State to seven, they look to run roughshod through the NBA next season. Losing Chris Paul to injury in Game 5 of the Western Conference Finals, the Rockets lost the last two games to the Warriors, booting them from the Finals.

Are the Golden State Warriors the most unbeatable team in the NBA? What moves and strategies are the other 29 teams devising to stop this super team?