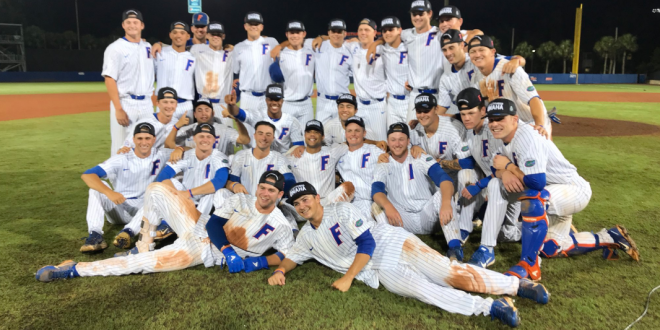 The Florida Gators (47-19) are off to Omaha for the fourth consecutive season following a 3-2 extra innings victory over the Auburn Tigers (43-23) Monday night. Austin Langworthy hit a walk-off home run in the eleventh inning that bounced off the glove of Auburn right fielder Steven Williams to send the Gators to the College World Series for the 12th time in program history.

Florida got the scoring started in the bottom of the opening frame when Jonathan India hit a solo home run into the visitor’s bullpen in right center. He’s the first Gator to hit 20 home runs in a season since Matt LaPorta in 2007.

After needing just 20 pitches to get through the first two innings, Florida starter Jack Leftwich ran into some trouble in the third. Sophomore Will Holland singled and stole second with two outs. Freshman Steven Williams then hit a RBI single through the right side to tie the game up at one.

The Gators then struck back in the fourth when Blake Reese stole home with two outs. Nick Horvath, who was on first, fooled Auburn starter Andrew Mitchell when he took off for second, stopped a third of the way there and fell to the ground. The stunt bought Reese enough time to sneak in and give the Gators a 2-1 lead.

This is absolutely amazing. pic.twitter.com/iDCCzYGVJO

Reese said the play “very seldom happens” and the timing has to be perfect for it to work.

Auburn then knotted the score back up in the seventh. After singling, advancing to second on a Wil Dalton fielding error and then moving up to third on a Tommy Mace wild pitch, Luke Jarvis scored on a Josh Anthony sacrifice fly.

The ball was hit to Dalton in right field and he nearly made up for his error earlier in the inning. He rifled a throw home that was both accurate and on time. However, Jarvis managed to slide around Jonah Girand’s tag to tie the game at two.

The Gators managed to get the game-winning run into scoring position in the tenth, but, following Daniel’s exit, freshman Cody Greenhill got Dalton to pop out to end the threat.

Leftwich pitched five innings and gave up one earned run while striking out three. Following two innings of relief from freshman Tommy Mace, Kevin O’Sullivan turned to Michael Byrne. He rose to the occasion. The All-American closer preserved the 2-2 tie for four innings. He gave up just one hit and one walk while striking out five. Byrne said he was trying to keep things simple and just get the team back in the dugout.

The game-winning home run came in the eleventh inning with no outs on a 1-2 count. Langworthy lined a Greenhill 94 mph fastball to deep right field. Auburn right fielder Steven Williams looked to have a chance to make a play, but the ball deflected off of his glove and over the fence in right.

After the game Langworthy said he was looking for the fastball and knew it had a chance to get out as soon as he hit it.

Florida head coach Kevin O’Sullivan said he felt good about Langworthy coming to the plate. After the game, he talked about the at-bat and his team’s impressive pitching performance.

Collectively, the Gators pitching staff held the Tigers to seven total runs over the course of the super regional. During regional play, Auburn’s offense pushed across 40 runs.

5,958 people attended the game. That’s the third largest crowd of the season and the eighth largest crowd ever at McKethan Stadium.

Florida will face Texas Tech on Sunday at 7 p.m. in their first game of the College World Series. The matchup will be televised on ESPN 2.