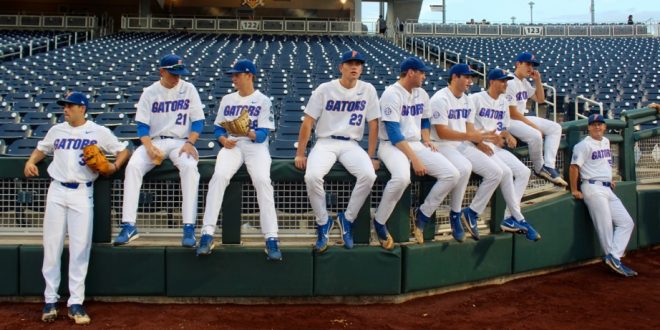 Gators Baseball in the CWS: Off Days in Omaha

While Gator baseball isn’t under the lights playing in the College World Series, the team has been finding ways to enjoy their stay and take in the city of Omaha, Nebraska. There’s a lot of down time between games, so when the boys aren’t practicing they have been exploring the city and spending time with their family.

To help pass the time, roommates Jackson Kowar and Brady Singer are enjoying eating with their families, playing pool and going to the zoo.

Singer said the pair went to Omaha’s Henry Doorly Zoo last year. The zoo is the 11th largest in the country, and features an indoor desert and rainforest. Last year, Kowar and Singer also visited the former CWS stadium, Rosenblatt, which held the CWS from 1950-2010. The stadium now hosts the Kansas City Royals‘ minor league team the Omaha Royals.

Jack Leftwich is slated to start on the mound for the Gators’ third game in the CWS on Thursday. Leftwich has a productive way to pass the time, doing yoga in his hotel room… yes yoga! Leftwich says he’s been doing it since high school and it really helps his game.

Leftwich also walked about four miles once on this trip when he chose to walk to the stadium and back with catcher Jonah Girand. Pitchers Michael Byrne and Tommy Mace thought he was crazy.

Byrne said the duo’s go-to for a good meal has been a sushi place called Blue and pizza joint called Zio’s.

Also, Bryne, India and a few of the other guys on the team went to see the movie Tag, which Bryne recommends.

Next Time To See The Gators In Action

With Jack Leftwich on the mound, Florida will rematch Texas Tech Thursday at 8pm ET on ESPNU.