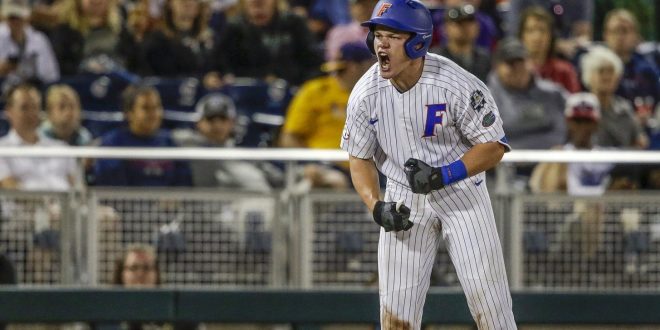 The Florida Gators (49-20) exacted revenge with a 9-6 win against the Texas Tech Red Raiders (45-20) Thursday night. After seeing his pitch count run up early, Florida starter Jack Leftwich settled down and quieted the Red Raiders offense to lead the Gators to victory. Florida has now won seven consecutive elimination games.

The Gators pushed the first run of the game across the board in the fourth and they did so without recording a hit. Jonathan India walked, advanced to second on a wild pitch, stole third and then scored on another wild pitch. Through four innings, Texas Tech starter Caleb Kilian was throwing a no-hitter, yet his team was down 1-0.

The Gators extended the lead in the following inning when Deacon Liput hit a double down the right field line that scored Blake Reese. A Nelson Maldonado RBI groundout then plated Nick Horvath to give the Gators a 3-0 advantage.

Captain JJ Schwarz hit a two-run home run in the sixth to left field. He was 1-for-11 in Omaha prior to the at-bat. The home run, his 13th this season and 50th of his career, put Florida up 5-0.

Florida starter Jack Leftwich ran into some early trouble in the bottom of the second. He pulled his fastball throughout the frame and walked two Red Raider hitters to load the bases after giving up a leadoff single. However, the freshman right-hander managed to escape the jam by getting the next two batters to pop out.

After working a quick third, he again got into a jam in the fourth with runners at first and second with one out. That’s when Austin Langworthy saved the day with a great sliding catch out in left field and doubled up Zach Rheams at second with a throw from his backside to end the inning.

Through two innings, Leftwich’s pitch count was at 54. He didn’t wind up exiting the game until the seventh. At one point, he retired 10 of 14 batters. In total, Leftwich pitched 6.1 innings, gave up seven hits, struck out five, walked two and gave up two earned runs.

Mace also failed to record an out. After the Brian Klein RBI made the score 5-1, Josh Jung made it 5-2 via an RBI single that scored Braxton Fulford. In the next at-bat, Grant Little reached on a Deacon Liput fielding error and Gabe Holt scored on the play to make it 5-3.

Jordan Butler took over for Tommy Mace and answered the call. He escaped trouble by striking out Rheams and getting Michael Davis to line out to right.

The Gators responded in the following inning by getting all three runs back. Dalton led off the inning with a double to left center. Schwarz moved him over on a groundout then Austin Langworthy drove him in via sacrifice fly.

Blake Reese continued the rally with a two-out double. Brady Smith, who received his first start of the College World Series, then plated Reese with an RBI triple off the top of the wall in center.

Brady Smith was about a foot away from a homer to dead center. At @tdameritradeprk. THAT is hard to do. #AgentSmith pic.twitter.com/laY97yT4Pv

Nick Horvath then capped the rally with an RBI single that scored Smith, giving the Gators an 8-3 advantage.

Hunter McMullen took over for Butler and struggled in the eighth. The Red Raiders loaded the bases with two outs and a Jung RBI single scored Cameron Warren to cut the deficit to 8-4. At that point, Florida head coach Kevin O’Sullivan decided to bring in closer Michael Byrne. Upon entering, he surrendered a two-RBI single to left off the bat of Little. However, the right-handed junior then worked out of the jam by inducing an inning-ending flyout to center.

The Gator offense added another insurance run in the top of the ninth. With two outs, Langworthy reached on a throwing error and India scored on the play to make the score 9-6. Byrne wouldn’t need the extra run as he ended Texas Tech’s season with a 1-2-3 ninth inning.

Florida will now face Arkansas Friday night at 8 p.m. ET. The game will be televised on ESPN. The Gators will need to defeat the Razorbacks twice to advance to the College World Series Finals.

I'm an above-average golfer with surprisingly great touch around the greens. Click on my twitter link for some sports talk.
@Ry_McGinn
Previous Gators Baseball in the CWS: Off Days in Omaha
Next FIFA World Cup Day Eight Recap: Messi and Argentina Struggle, France Advances