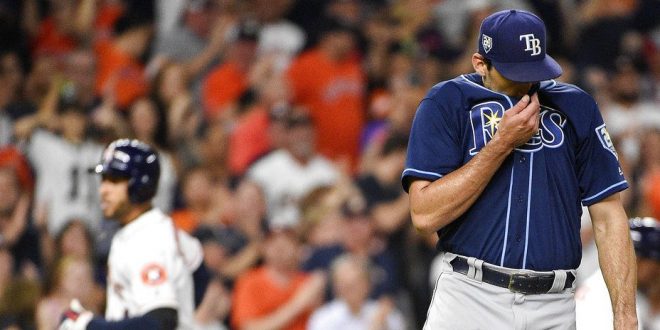 MLB Action: Marlins, Rays Come Up Short on the Road

On Wednesday, the Miami Marlins and Tampa Bay Rays wrapped up three-game road series each before having an off-day on Thursday.

While the Marlins were on the West Coast to face the San Francisco Giants, the Rays played the Houston Astros in Texas.

The two teams came up short against their respective opponents, and ultimately lost the series.

An error in the top of the fourth inning by Houston led to outfielder Mallex Smith giving Tampa a 1-0 lead. That short-lived lead disappeared when Astros’ second baseman José Altuve launched a solo home-run in the bottom of the fourth to tie the game.

Hech can go get it.

Although pitcher Nathan Eovaldi had a solid outing for the first five innings, the sixth inning is where things went wrong. Eovaldi gave up three straight solo home-runs without getting an out before being pulled from the game.

The Astros added some icing on the cake with another run in the bottom of the seventh to put the game out of reach.

The long ball did us in tonight.

Like the Rays, the Marlins had a rocky start to Wednesday’s game that saw them trail 5-1 after six innings. Unlike their fellow team from Florida, however, the Marlins made the game interesting down the stretch.

A sacrifice fly by Yadiel Rivera and a single by Starlin Castro cut the Giants lead down to three going into the bottom of the seventh.

Castro continued to come up in the clutch for the Marlins when his sacrifice fly in the ninth inning cut the deficit to two runs. Third baseman Brian Anderson singled with two outs left to bring Miami within one run of a tied ballgame.

The Marlins were unable to complete the comeback as J.B. Shuck struck out with the game on the line.

After having a day off on Thursday, the Rays will begin a three-game homestand against the New York Yankees starting on Friday. The Marlins will travel to Colorado to take on the Rockies tomorrow for their third straight three-game road series.