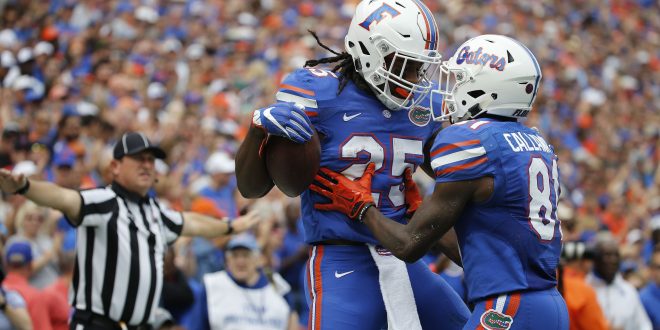 There’s no denying that some fire power will be added back into the Gators running backs this season. The group of guys at this position could just be the key the offense needs to be successful. The Gators have a total of six options, yes six, for the position and all of them bringing talent to the field this season. Those six guys are: Jordan Scarlett, Lamical Perine, Malik Davis, Adarius Lemons, Dameon Pierce and Iverson Clement.

Let’s break them down.

Obviously, the team is happy to have Scarlett back after sitting out all of last season due to his involvement in the credit card scandal. Scarlett said before spring that he was “more hungry than ever” to get back to work. It’s his last chance to prove himself.

In 2016, Scarlett started a total of 8 games and led the team in carries (179), yards (889), and rushing touchdowns (6). It’s expected he will do even better than that come the start of the season due to the fact he’s bigger and stronger than before.

And Scarlett’s own personal goal for the season? Well, that’s easy. To get that SEC Championship.

The Rest of the Pack

Behind Scarlett, the returning players are Perine, Davis and Lemons. Davis looked incredible on the field last season with 534 yards and 2 touchdowns. However, he did tear his ACL against Georgia. Davis is set to be coming back for the start of practice, but probably will be non-contact at the beginning. He should be back for the season.

Perine, also a standout, had 588 rushing yards and 8 touchdowns on the ground last season. Putting up great numbers like that makes him a really good option for the position. Last, but not least, Lemons will also see some time on the field after a pretty good freshman season. He had 139 yards last year on the field. His teammates also say he’s one of the toughest offensive players to face out there.

Chauncey Gardner-Johnson says that RB Adarius Lemons is the most hard-nosed player on offense for #Gators.

The Gators also have a little fresh blood into the mix. Pierce and Clement were two highly recruited players by the Gators, especially 4-star-recruit Pierce. Pierce went to Bainbridge High School in Georgia and many thought he would stay in his home state for football. Instead, he decided to come to Florida and make the competition for the position a little bit tougher. We could be seeing a lot of Pierce this year as he rushed for 2,123 yards and scored 32 touchdowns in his senior season.

With practice starting today, this could be an interesting group of guys to watch. There’s lots of depth at the position, and it’s probably one of the more solid groups. Co-offensive coordinator John Hevesy said that it’s always fun to see the effort given in Fall camp.

“We’ve had the one guy, and then you’ve had two that’s a good player, and three, okay, he’s got to learn and develop,” Hevesy said about previous teams. “To have the number we have—there’s a bunch of kids … So to me, that will be an intriguing thing going into camp of who’s done their job in the summer, got better in the summer to turn it over into fall camp.”

Courtney Mims is a junior telecommunications major at the University of Florida. She enjoys covering all Gator sports and drinking gallons of Starbucks coffee while doing so.
Previous UF Position Preview: Quarterback
Next Gators Wide Receivers Provide Offense With Different Options