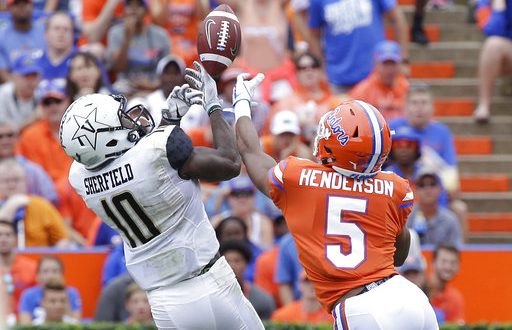 Florida Gators defensive back  C.J. Henderson is the next guy on our preview list. The Miami, Florida, native looks to start at cornerback this season among a crowded returning defensive backs corps.

Henderson didn’t get his first start until the third game of the season at Kentucky. His impact was certainly felt in the first two games. Against Michigan, a loss, the true sophomore was one of the few bright spots for the Gators. After defensive back Duke Dawson tied it up at 10 with a pick-six, Henderson snagged a pick-six of his own to give Florida a 17-10 lead.

Then, one game later against Tennessee, he was back at it again with another pick-six to give Florida a 13-3 lead in the fourth quarter.

PICK. SIX.
Third pick of the day for @GatorsFB.
Their third pick six of the season. pic.twitter.com/AfB7fBziIs

Henderson led the team in pick-sixes, and he tied for the lead in interceptions with four. He was a force alongside other true freshman defensive back Marco Wilson and was one of the positive parts of the UF defense last year.

After a fairly solid 2017 campaign, Henderson looks to step up in an even bigger way in 2018. The hiring of Dan Mullen brings a new swagger to the unit after a tough season defensively.

At media day, Henderson talked about how his relationships with his teammates off the field have been just as important as on.

Henderson also said he hasn’t been working on anything specific this offseason, but instead his all-around game.

Finally, the defensive back talked about what exactly Gator fans can expect from him and his defense this upcoming season.

After a lackluster year from its defense, UF is going to need the Miami-product to have a big year. With nearly all of its unit returning, the defensive backs will be the backbone of the defense.

Chris O'Brien is a rising sophomore at the University of Florida. He aspires to be an on-air sports anchor someday.
Previous Gator Profile: Chauncey Gardner-Johnson Looks to Stand-Out in his Junior Season
Next Mullen’s Press Conference After The First Scrimmage