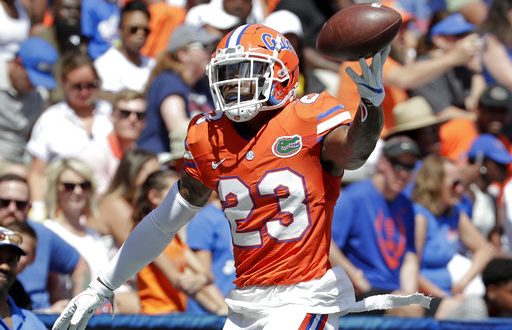 Chauncey Gardner-Johnson is preparing for his junior season with an even larger role ahead.

The versatile defensive back out of Cocoa, Florida is not only coming in with a new name on his jersey, but also a new role in Todd Grantham’s defense as a leader and the next great Florida Gators defensive back.

Look Back at the 2017 Campaign

Gardner-Johnson played a key-role in the Gators’ defense last season. He started all 11 games, ranking second on the team in tackles with 58, and ranking third in passes defended with seven.

As well as Gardner-Johnson played at safety last season, he was inconsistent in his tackling. He improved as the season progressed, but he must show elite tackling abilities this season in order to become a next-level defensive back.

A Chance to Take the Next Step

With cornerback Duke Dawson gone to the NFL, Gardner-Johnson is now the veteran leader of the Gators’ defensive backfield.

Many thought Gardner-Johnson would transition back cornerback, the position he was first recruited as. However, Dan Mullen confirmed that he would be at the safety position while moving around depending in the scheme.

As the Gators’ new leading defensive back, Gardner-Johnson must turn himself into the next top defensive back to come out of D.B.U. for the Gator defense to be successful.

When asked about his attitude coming into games as well as his motivation, Gardner-Johnson had this to say:

In a separate question, Gardner-Johnson described the effect that defensive coordinator Todd Grantham has had on his game.

If he can improve his tackling and continue to be a ball-hawk on the defensive side of the ball, Gardner-Johnson can not only propel himself into one of college football’s elite defensive players, but into the 2019 NFL Draft discussions.

As the season progresses, look to Chauncey Gardner-Johnson to continue Florida’s legacy as “Defensive Back University.”