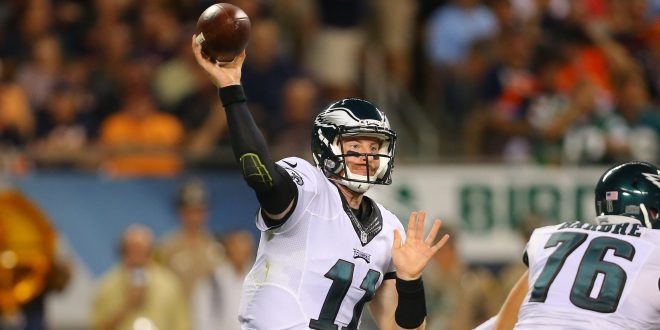 Carson Wentz Could Be Back Week 1 of NFL Season

Philadelphia Eagles fans could be seeing Carson Wentz on the field for Week 1.

The Philadelphia Eagles quarterback was cleared for 11-on-11 drills Sunday, but still has not been cleared for contact. He’s still recovering from his December surgery to repair his torn ACL.

He told media a couple days ago that if he is cleared, it will have been a “close” call.

“That’s been my goal. I think there’s really been no secret that it’s gonna been close, you know, seeing where I’m at in camp and finally hopefully next week doing 11-on-11. I think naturally it’s gonna be close,” Wentz said. “Ultimately, it won’t be just my call or coach’s call, it will come down to what the doctors say.”

What’s Coach Got to Say?

“It’s big to begin to evaluate him and see where he’s at and get him back in there with the guys,” Pederson said. “Again, it’s still a slow process, but at the same time it’s exciting for him and for us to get him back out there.”

Wentz said he won’t be playing in the Thursday game against the Cleveland Browns and it’s not likely he will play in the last pre-season game on Aug. 30 against the New York Jets.

If Wentz isn’t ready, Nick Foles is ready and able to step in. Foles left the Patriots pre-season game with a sprained shoulder, but was back in practice this week and is expected to start against the Browns Thursday.

Foles is a quality option for the Eagles, but Wentz is obviously the better choice.

In Wentz’s second season in the NFL, he threw for 3,296 yards and 33 touchdowns. On the other hand, Foles played in seven games last season and threw for 547 yards and 5 touchdowns. Not a bad backup option for the Eagles, but if Wentz can be healthy then the Eagles could be in really good shape for the start of the season.

The Eagles season opener is Sept. 6 against the Atlanta Falcons.

Courtney Mims is a junior telecommunications major at the University of Florida. She enjoys covering all Gator sports and drinking gallons of Starbucks coffee while doing so.
Previous Taking the A’s Train
Next Looking to Add Depth, Redskins Add Former NFL MVP Adrian Peterson