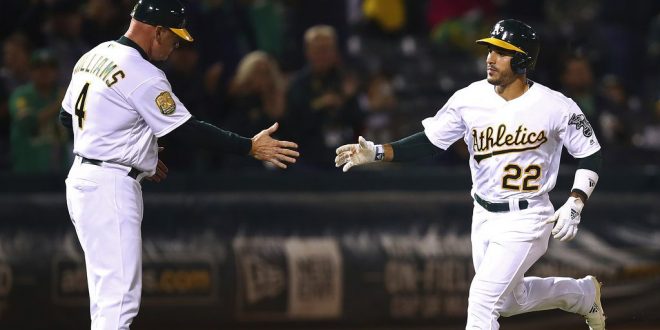 After a shutout win Monday night against the Texas Rangers, the A’s now sit atop the AL West standings tied for first place with the defending champion Houston Astros.

Since losing four straight from June 12 to June 15 that pushed them to 11.5 games back of first, the Athletics are now on a 40-14 stretch that has them right in the middle of the pennant race.

Coming Out of Nowhere

The Athletics have been a surprise this season as they were expected to finish near the AL West’s cellar going into the beginning of the year by multiple outlets:

On June 19, FiveThirtyEight’s division and postseason probabilities fell to less than 1 percent and 5 percent, respectively. Both of those have now jumped to 87 and 33 percent.

As they have multiple times in recent memory, the Athletics are performing without breaking the bank to do it.

They are tied for the third-best record in the American League while only boasting a payroll that ranks No. 28 in all of baseball according to Sportrac.com at just over $79 million.

The Athletics are keeping pace in the AL West with the Astros, a team with a payroll that ranks No. 9 and is almost double the amount of Oakland’s.

Late-season-blooming corner infielders Matt Chapman (3B) and Matt Olson (1B) each contribute less money than Manaea at $547,500. The two have combined for 40 home runs and 100 RBIs on the season.

Oakland has just 37 games left in the regular season for its discount lineup to keep paying dividends and one three-game series against the Astros left. Within those 37 games are seven series against teams with records no better than .500.