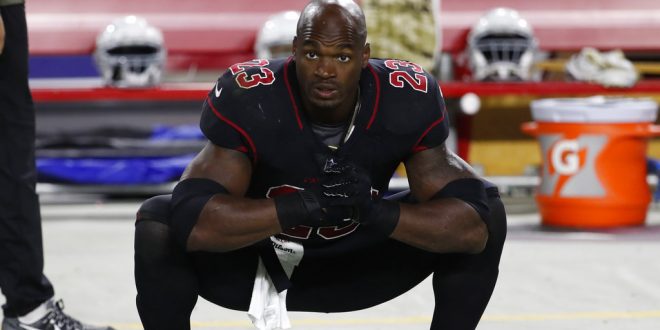 FILE - In this Nov. 9, 2017 file photo Arizona Cardinals running back Adrian Peterson (23) watches at the sideline during an NFL football game against the Seattle Seahawks in Glendale, Ariz. The Washington Redskins have signed Peterson. The team announced the deal Monday, Aug. 20, 2018 after meeting with him. (AP Photo/Rick Scuteri, file)

With just 16 days until the NFL regular season kicks off, Adrian Peterson has found a new home.

After spending last season with both the Arizona Cardinals and New Orleans Saints, Peterson had remained a free agent until agreeing to a one-year deal with the Redskins on Monday.

According to ESPN’s Adam Schefter, Peterson signed for the veteran minimum of $1.015 million. Peterson, who is considered by many to be a future Hall of Famer, will provided much-needed depth for the Redskins.

The Redskins have had a tough preseason so far in terms of dealing with injuries to their running backs.

Derrius Guice, who was selected by Washington in the second round of the 2018 NFL Draft, tore his ACL against the New England Patriots on August 9th. Guice posted a photo him getting ready to have surgery on his left knee on Monday:

The Redskins will also be without two of their other running backs for an unknown stretch of time. Samaje Perine and Byron Marshall both left Thursday night’s game against the New York Jets with ankle injuries.

Given the need for players in the backfield, the team worked out Orleans Darkwa, Jamaal Charles and Peterson on Sunday.  Ultimately, Washington decided to go with Peterson, and even added De’Veon Smith to add more depth at that position.

Peterson and Smith will join Rob Kelley, Chris Thompson and Kapri Bibbs as the only healthy running backs on the Redskins’ roster. It is not yet known how head coach Jay Gruden will split minutes between these five players in their next preseason matchup.

Although Peterson is 33 years old and has played in the NFL since 2007, he is ready for this opportunity.

After posting seven seasons of 1,200-plus yards in his first nine years, Peterson is on the backend of his career. Even so, the 12-year veteran has been preparing over the last few months for his next shot in the NFL:

While doing an interview with the Redskins’ staff members, Peterson said it was a tough process having to wait for a team to sign him. It took a while for him to join an NFL roster again, but Peterson will still be competing in the final two preseason games for significant playing time during the regular season.

Peterson also spoke to the quality of the Redskins’ organization, Gruden as a head coach and the fanbase:

"I'm elated. I'm so excited to have this opportunity." –@AdrianPeterson

Peterson and the Redskins (1-1) will host the Denver Broncos on Friday night at 7:30 p.m.

Previous Carson Wentz Could Be Back Week 1 of NFL Season
Next Florida Volleyball: Freshmen Look to Fill Important Spots