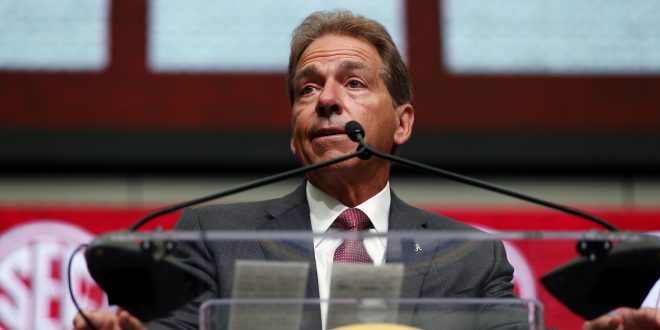 Nick Saban Still Unsure of Who Alabama Starting QB Will Be

Quite a few quarterback controversies were sorted out all over the college football world Monday afternoon. Feleipe Franks starting for Florida, Deondre Francois starting for FSU, and even Mississippi State’s Nick Fitzgerald suspended for the season opener. However, Alabama Head Coach Nick Saban still doesn’t want to show his hand when it comes to who will start for them at the quarterback position.

Alabama depth chart for this week against Louisville. pic.twitter.com/nF6zhepdoB

On Alabama’s depth chart, Jalen Hurts and Tua Tagovailoa are listed as co-starters. Saban says both players are playing well.

A Breakdown of Both Guys

Since the College Football Playoff National Championship Game back in January, both Hurts and Tagovailoa have been competing for the job. In the CFP Championship, Hurts was benched at halftime to allow Tagovailoa to come in and give the Tide a new look. Tagovailoa threw three touchdowns in that game.

Hurts, who is a junior, has definitely proven himself as a quarterback. He was the 2016 Offensive Player of the Year and has a career 4,861 passing yards, 40 passing touchdowns, 1,809 rushing yards and 21 rushing touchdowns. Hurts also can protect the ball, giving up only one interception last season. That’s a lot of production for Tagovailoa to live up to.

However, Tagovailoa is the fan-favorite to win the position. He didn’t have any starts but played in eight games last season for the Crimson Tide. In his limited playing time, he managed to complete 49 of 77 passes for 636 yards and 11 passing touchdowns. Alabama missed this passing game under Hurts.

As for any more Saban hints, he said once he’s ready to announce who the starter will be, he will.

The Alabama Crimson Tide open their season Saturday against Louisville.

Courtney Mims is a junior telecommunications major at the University of Florida. She enjoys covering all Gator sports and drinking gallons of Starbucks coffee while doing so.
Previous Dan Mullen Names Feleipe Franks Starting Quarterback
Next Spurrier Speaks on Florida’s Season Opener