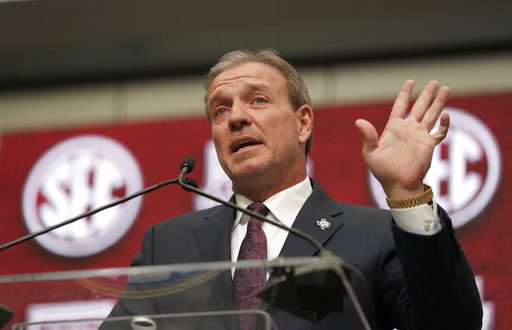 College football season is officially back. The Texas A&M Aggies face off with the Northwestern State Demons Thursday night at 8:30 p.m. on the SEC Network. Let’s take a look at a few storylines heading into game day.

Who is the real starting quarterback for the Aggies?

But that decision came with a caveat: Both Mond and Nick Starkel expect to get snaps. The Northwestern State game could have big implications for A&M’s next game against the Clemson Tigers.

Fisher said either one of his players gives the team a chance to win.

Whoever shows themselves to have a more consistent approach between the two looks to start against the Tigers.

Fisher, the former FSU head coach, now patrols the A&M sideline for the first time in his career.

After an interesting separation from FSU in which rumors zipped that Fisher wanted better facilities, the Aggies gave him a 10-year, fully-guaranteed, $75 million contract. In addition, that contract includes a non-existent buyout clause – any team that wants to sign Fisher away can do so without owing A&M a penny.

When the team gave Fisher that much money over that much time, Aggies fans were rightfully apprehensive. Although Fisher is crushing it on the recruiting front, he could certainly use a big first game against a mediocre team to get fans fired up about the hire.

Does Northwestern State have a chance?

The obvious answer to this question is no. But the Demons have nothing to lose.

They have a head coach making his own debut in Brad Laird.

Northwestern St. also will ostensibly get a huge payday from the Aggies and have a senior quarterback in Clay Holgorsen who’s been around the block.

Last year against McNeese, Holgorsen went 26-for-41 with 381 yards and three touchdowns in a 44-24 loss. Obviously, McNeese isn’t an SEC team, but it’s college football – anything can happen.

Chris O'Brien is a rising sophomore at the University of Florida. He aspires to be an on-air sports anchor someday.
Previous CFB Preview: No. 3 Georgia vs. Austin Peay
Next A Look At Non-SEC Florida College Football Team Opening Games