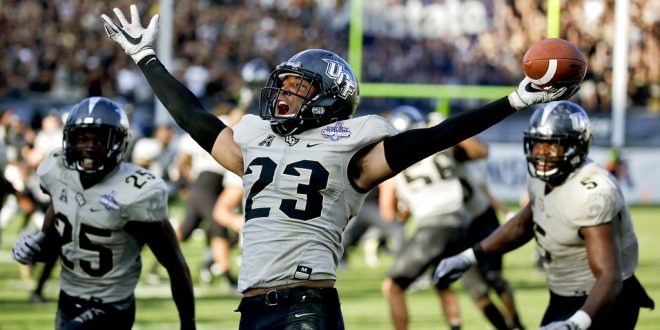 FILE - In this Dec. 2, 2017, file photo, Central Florida defensive back Tre Neal (23) celebrates after intercepting a Memphis pass to end the American Athletic Conference championship NCAA college football game in Orlando, Fla. When UCF’s new coaching staff relegated him to the second team in spring practice, Neal got the nudge he needed to look for a place he could make the most of his final season as a graduate transfer. Neal landed at Nebraska, and he feels right at home. (AP Photo/John Raoux, File)

Here’s an inside look of the non-Southeastern Conference including opening games this weekend for college football teams in Florida. No. 21 UCF is the first team to open its season with an AAC clash with Connecticut tomorrow at 7 p.m. On the other hand, USF plays Elon, FAU battles No. 7 Oklahoma, FIU takes on Indiana and No. 19 Florida State faces No. 20 Virginia Tech.

FAU vs No. 7 Oklahoma

Lane Kiffin’s Florida Atlantic Owls begin the season with a difficult game against the Oklahoma Sooners. FAU redshirt freshman Chris Robison, a transfer from Oklahoma, is in a three-man race for the starting quarterback job. Oklahoma Head Coach Lincoln Riley, who recruited Robison, commented on his former player.

However, FAU finished with the sixth-best running game last year with 285.3 yards per game last season. Therefore, the Sooners defense may need to focus on running back Devin Singletary. Singletary rushed for 1,920 yards and 32 touchdowns in 2017.

Despite losing Heisman trophy winning quarterback Baker Mayfield to the NFL, the Sooners aim to continue being an offensive juggernaut with Kyle Murray. Murray previously transferred from Texas A&M and was drafted ninth in the MLB Draft by the Oakland Athletics.

Riley said his players are hungry to play and praised Kiffin’s team.

In the Atlantic Coastal Conference, No. 2 Clemson is favored to win the Atlantic Division and No. 8 Miami (FL) for the Coastal Division. Consequently, Virginia Tech and Florida State will fight to beat second in each of the divisions. Florida State enters the nationally-televised game with Willie Taggart as the new head coach after Jimbo Fisher left to Texas A&M.

Although both teams are not getting a lot of attention nationally, the Hokies have young talent returning on both sides of the ball and the Seminoles have QB Deondre Francois and DT Demarcus Christmas back to help on each side of the line. Virginia Tech finished with the 11th-best total defense in the country last season. A Ricky Aguayo field goal could be the difference in this potential thriller.

No. 21 UCF vs Connecticut

QB McKenzie Milton will lead the team without former head coach Scott Frost leaving for the job at Nebraska. UCF is now led by Josh Heupel, formerly the offensive coordinator and quarterback coach at Missouri, to keep Milton improving. The Knights may not finish 13-0 ever again, but they have the firepower with Adrian Killins Jr., Otis Anderson, Dredrick Snelson and more back on offense.

A Huskies team that finished 3-9 last year has a young core under Randy Edsall will look to return to a bowl game this season and possibly a high AAC finish, but the Knights could be too strong despite the coaching change.

Coach Martinez and Coach Cooper break down the Huskies as we prepare for Thursday's opener at UConn.

Charlie Strong leads the Bulls in his second year in charge with the task of replacing QB Quinton Flowers. The Bulls lost to UCF in the AAC title game last year after managing 21 wins in the last two seasons. Despite losing many players on both sides of the ball, USF has the athleticism to beat an 8-4 Elon team that had a berth in the FCS playoffs.

The Hoosiers beat FIU 34-16 in 2016, a year before Butch Davis took over as head coach. Davis returns in his second season with the Golden Panthers after finishing 8-5 in 2017. Indiana has a veteran presence on the offensive line as all five starters returned and Peyton Ramsey as the starting QB. Ramsey played nine games last season as a redshirt freshman.

The kickoff vs. Indiana countdown is at FOUR days.

On the other hand, FIU has Anthony Johnson and Fermin Silva on defense to force turnovers. Davis said QBs Christian Alexander and James Morgan are both likely to play against Indiana in the opener.