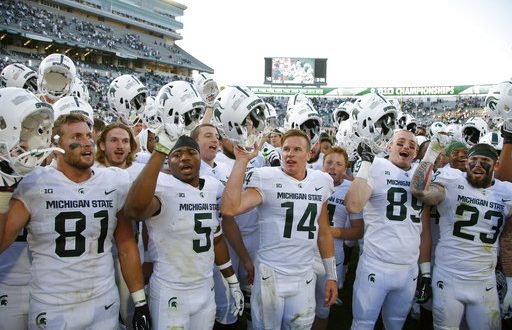 Preview: College Football is Back with Michigan State vs. Utah State

In one of the earlier games of the 2018 College Football season,  the No. 11 Michigan State Spartans take on the Utah State Aggies.

Michigan State has some high expectations this season. The Spartans are bolstered with plenty of talent and enter the season as the 11th overall team in the nation. After a disappointing 3-9 record in the 2016 season, the Spartans had a fantastic bounce-back season last year, earning a 10-3 record. They defeated Michigan, Penn State and finished the season with a blowout win over Washington State in the Holiday Bowl. This year, the sky is the limit for Michigan State. Quarterback Brian Lewerke and Running Back L.J. Scott both return to the Spartan offense after very good performances last year.

“I feel like we’re a good enough offense to put a lot of points up, hopefully,” Lewerke said to the Detroit Free Press. “I know the offense like the back of my hand now, I can focus a lot more on what the defense is giving me. I trust all my guys to run all the right stuff.”

MSU’s offense really has the chance to be something special this year.

Utah State Trying to Get Back to Winning

The Aggies went 6-7 last year, 3-9 in 2016, and 6-7 in 2015. Before that, the Aggies had a combined record of 30-11 from 2012-14. They are trying to get back to that level of success. Part of the reason the Aggies have underachieved in the past few years is that they have lost eight straight one-possession games. Aggies Head Coach Matt Wells has continued to put his team in positions to win, but they struggle with closing out games.

While a close game or even a win against Michigan State would give Utah State a lot of confidence, it doesn’t seem likely. The Aggies are 1-14 all-time against Big Ten opponents. Last season, they started the year with a 59-10 loss at Wisconsin. Still, with a lot of returning starters including QB Jordan Love and WR Ron’quavion Tarver, they will give the Spartans their best. Dantonio had some comments about what the Aggies do well on offense:

Michigan State vs. Utah State is on Friday, August 31st at 7:00 p.m. ET. Michigan State goes into the game as 23.5 point favorites.