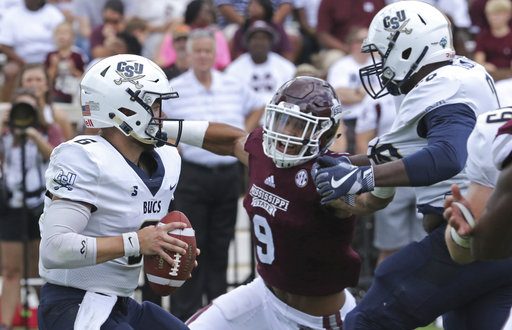 In their season opener, Charleston Southern football is trying to make a statement as they take on the Florida Gators in Gainesville.

Tucker says that it’s “basically an annual event” to open the season against Florida’s Dan Mullen.

Tucker says that the familiarity helps the coaches have a better understanding of what’s to come. Coach tucker also said, “My goal is a much, much more competitive football team then we took to Starkville last year.” Tucker also mentioned that he thought defensively the Buccaneers held their own against the Bulldogs, but not offensively.

Coach Mullen agrees that playing Charleston Southern last year at Mississippi State does give the coaching staff an advantage.

Tucker has confidence that he knows what to do up against top competition. “I have a pretty good understanding of what it takes,” Tucker says, “to go into these venues in order to be competitive at every turn. One, taking advantage of every opportunity you can create for yourself offensively and you take advantage of every mistake made by someone else defensively and your very sound in the kicking game.”

Buccaneers on Offense and Defense

Coach Tucker explained the team is running a 4-3 defense and they are going to play to their teams strengths.

He also mentioned how Charleston Southern runs a triple option, but is huge on passing the ball.

Despite the team being heavy in the passing game, they also do pretty well rushing. Quarterback London Johnson showed to be a force in the run game last season, as he carried the ball 80 times for 465 yards with 3 rushing TD’s.

Red shirt junior, Ronnie Harris, was the second leading rusher to Noah Shuler. Harris rushed for 413 yards from 72 carries and had 2 touchdowns.

Charleston Southern is taking on the Florida Gators in Gainesville on Saturday at 7:30. Pregame coverage of the game starts at 3:30 on ESPN 98.1 FM or 850 AM. The game can be viewed on the SEC Network.