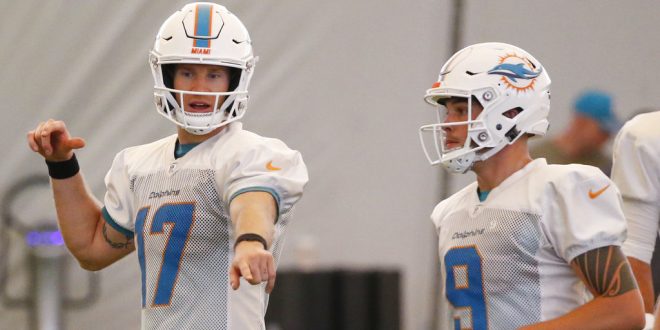 Miami Dolphins quarterbacks Ryan Tannehill (17) and David Fales (9) line up for a drill during practice at the NFL football team's training facility, Thursday, Sept. 6, 2018, in Davie, Fla. After missing last season with a knee injury, Tannehill returns for the Dolphins' season opener against the Tennessee Titans Sunday. (AP Photo/Wilfredo Lee)

On Sunday, the Dolphins begin their 2018 campaign. Tennessee visits the Hard Rock Stadium for a 1 pm kickoff.

Miami head coach Adam Gase is entering is third year of coaching the Dolphins, but there hasn’t been a huge amount of success. So far, Gase is 16-16 in the regular season and 0-1 in the playoffs.

Many don’t put all of the blame on Gase due to the absence of 7th year quarterback Ryan Tannehill.

Tannehill has battled various injuries his entire career, but since tearing his ACL he’s been sidelined for almost two years.

He shows flashes of potential, but many can’t decide how good he really is. Most average quarterbacks don’t get the same support from NFL owners like Tannehill has.

The Dolphins have stuck by Tannehill through all of the turbulence. He was taken number 8 overall in 2012. He has only played 24 games in his career, and hasn’t proven he can win at all in the postseason. Still, the Dolphins are sticking with their guy.

They also parted ways with interim starting quarterback Jay Cutler, the only departure that pleased Miami fans.  The major additions to the roster come in the form of draft picks, most notably top ten pick Minkah Fitzpatrick.

The national championship winning cornerback out of Alabama. However, it’s hard to predict the scale of Fitzpatrick’s impact year one. They also add veteran wideout Danny Amendola.

This bodes well for Miami if Tannehill gets off to a hot start. While playoffs might not be in the cards this year for Miami it’s still in the realm of possibilities. A potential Wild Card chase could breathe some life back into the fanbase.

Alabama and Miami travel to Atlanta, Georgia this weekend for the Chick-fil-A kickoff game. Both …